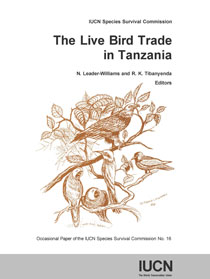 The Live Bird Trade in Tanzania

Proceedings Of A Workshop Held In December 1991

The practice of keeping live birds in captivity has been widespread throughout this century and has increased considerably as the 20th century comes to a close. In the last decade or so, the increased trade in live birds from Tanzania has given rise to a number of concerns regarding the sustainability of the trade, its effects on bird numbers, and illegal trafficking. As part of its efforts to palliate the lack of legislation and planning in this domain and to evaluate the effects of this trade, in 1990 the Tanzanian government initiated the Planning and Assessment for Wildlife Management (PAWM) project. As part of this project, a workshop on the live bird trade in Tanzania was organized in Dar Es Salaam in December 1991 and gave rise to a series of initiatives. This publication provides a record of these initiatives and of the PAWN's efforts to arrive at and implement them. It also provides a record of the papers presented during the workshop and the recommendations that emerged therefrom.