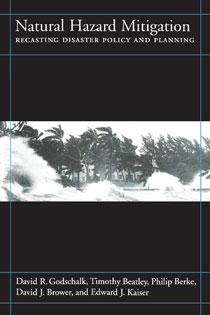 The first half of the 1990s saw the largest and most costly floods, hurricanes, and earthquakes in the history of the United States. While natural hazards cannot be prevented, their human impacts can be greatly reduced through advance action that mitigates risks and reduces vulnerability.

Natural Hazard Mitigation describes and analyzes the way that hazard mitigation has been carried out in the U.S. under our national disaster law, the Robert T. Stafford Disaster Relief and Emergency Assistance Act. It is the first systematic study of the complete intergovernmental system for natural hazard mitigation, including its major elements and the linkages among them.

Damages from natural disasters are reaching catastrophic proportions, making natural hazard mitigation an important national policy issue. The findings and recommendations presented in this volume should help to strengthen natural hazard mitigation policy and practice, thereby serving to reduce drains on the federal treasury that pay for preventable recovery and relief costs, and to spare residents in areas hit by natural disasters undue suffering and expense. It is an informative and eye-opening study for planners, policymakers, students of planning and geography, and professionals working for government agencies that deal with natural hazards.

PART II. Mitigation in Action: Six Disaster Cases
Chapter 3. Florida after Hurricane Andrew
Chapter 4. Missouri after The Midwest Floods of 1993
Chapter 5. Iowa after the Midwest Floods of 1993
Chapter 6. California after the Loma Prieta and Northridge Earthquakes
Chapter 7. Massachusetts after Hurricane Bob and Other Storms
Chapter 8. Tennessee after a Series of Floods and Storms