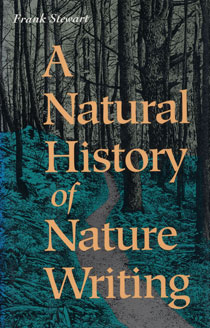 A Natural History of Nature Writing

A Natural History of Nature Writing is a penetrating overview of the origins and development of a uniquely American literature. Essayist and poet Frank Stewart describes in rich and compelling prose the lives and works of the most prominent American nature writers of the19th and 20th centuries, including:

Stewart highlights the controversies ignited by the powerful and eloquent prose of these and other writers with their expansive – and often strongly political – points of view. Combining a deeply-felt sense of wonder at the beauty surrounding us with a rare ability to capture and explain the meaning of that beauty, nature writers have had a profound effect on American culture and politics. A Natural History of Nature Writing is an insightful examination of an important body of American literature.
Contents

Chapter 1. A Hound, a Bay Horse, and a Turtledove
Chapter 2. Timothy the Tortoise
Chapter 3. The Pout's Nest and the Painter's Eye
Chapter 4. The Labor of The Bees
Chapter 5. The Woodcock's Leg
Chapter 6. Mountain Self
Chapter 7. In the Eye of the Wolf
Chapter 8. Small Winged Forms above the Sea
Chapter 9. The Moon-Eyed Horse
Chapter 10. Writing the Wild