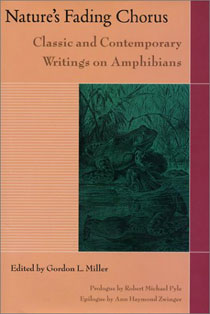 Classic And Contemporary Writings On Amphibians

Naturalists in every age have been intrigued by frogs, toads, and salamanders. They have seen these amphibians in a variety of guises -- as beings with magical powers or implicit moral lessons, as the products of spontaneous generation, as heralds of the seasons, as evidence of evolution or material for biological experiments, or, most recently, as ecological barometers for the biosphere.

Nature's Fading Chorus presents an anthology of writings on amphibians drawn from the entire Western natural history tradition, beginning with Aristotle's Inquiry Concerning Animals written in the fourth century B.C.E., and continuing through recent scientific accounts of the relatively sudden -- and alarming -- global declines and deformities in amphibian species. The offerings not only reveal much about amphibian life, but also provide fascinating insight into the worldviews of the many writers, scientists, and naturalists who have delved into the subject.

The book is divided into five sections. The first three offer selections from the most influential contributors to the Western canon of natural history writing, and contain classic texts that illustrate central themes in the changing understanding of amphibians and of the natural world. The fourth section offers engaging essays by leading twentieth-century nature writers that portray a variety of amphibians in diverse terrains. Part five covers the various aspects of, and research on, the problem of amphibian declines and deformities. Featured are more than thirty-five pieces, including works from Pliny the Elder, Gilbert White, William Bartram, Henry David Thoreau, Charles Darwin, T. H. Huxley, Loren Eiseley, Stephen Jay Gould, George Orwell, Annie Dillard, Terry Tempest Williams, and many others.

Arranged chronologically, the writings provide an intriguing look at the ways in which humankind's understanding of its place in nature has changed through the course of Western history, and of the niche amphibians have occupied in that evolution.