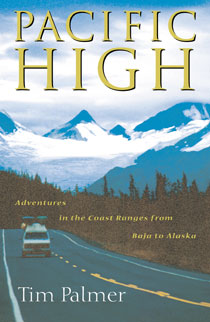 Adventures In The Coast Ranges From Baja To Alaska

"Starting out, my mind and spirit were open to the mystery of foreign cultures, the spareness of aridity, the tension of seismicity, the heat of fire, the exuberance of the vast, the abundance of rot and rebirth, the kindness of strangers, the indomitable rules of climate, the triumph of life, the limits of the earth.""—from the prologue.

On a crisp January morning, the first day of a new year, writer Tim Palmer and his wife set out in their custom-outfitted van on a nine-month journey through the Pacific Coast Ranges. With a route stretching from the dry mesas of the Baja Peninsula to the storm-swept Alaskan island of Kodiak, they embarked on an incomparable tour of North America's coastal mountains high above the Pacific.

In Pacific High, Palmer recounts that adventure, interweaving tales of exploration and discovery with portraits of the places they visited and the people they came to know along the way. Bringing together images of places both exotic and familiar with profiles of intriguing people and descriptions of outdoor treks on foot, skis, mountain bike, canoe, and whitewater raft, Palmer captures the brilliant wonders of nature, the tragedy of irreversible loss, and the hope of everyone who cares for this extraordinary but threatened edge of North America.

At the heart of the story is author's concern for the health of the land and all its life. Nature thrives in many parts of the Coast Ranges—pristine rivers and ancient forests that promise refuge to the king salmon and the grizzly bear—but with a human population of 36 million, nature is under attack throughout the region. Oil spills, clearcutting, smog, sprawling development and more threaten even national parks and refuges. Yet Palmer remains hopeful, introducing readers to memorable people who strive for lasting stewardship in this land they call home.

Prologue: Between the Sea and the Sky

Chapter 1. Into Baja
Chapter 2. The Volcan and the Mexican Desert
Chapter 3. Borderlands and Refuges
Chapter 4. Rising Above Los Angeles
Chapter 5. Mountains and Fire
Chapter 6. A Dream of Condors
Chapter 7. The People's Mountains
Chapter 8. The North Coast
Chapter 9. Kalmiopsis to the Columbia
Chapter 10. Olympic Odyssey
Chapter 11. The Island of a Different Nation
Chapter 12. Northward by Boat
Chapter 13. Glaciers to the Sea
Chapter 14. The Ultimate Mountains
Chapter 15. Across the Icefield
Chapter 16. To the Ends of the Earth

Notes
Acknowledgments
About the Author
Index