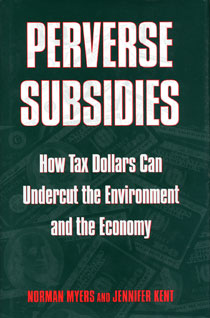 How Misused Tax Dollars Harm The Environment And The Economy

Much of the global economy depends upon large-scale government intervention in the form of subsidies, both direct and indirect, to support specific industries or economic sectors. Distressingly, many of these subsidies can be characterized as “perverse” -- rather than helping society achieve a desired goal, they work in the opposite direction, causing damage to both our economies and our environments. Worldwide subsidies have long been thought to total $2 trillion per year, but until now, no attempt has been made to determine what proportion of that actually subverts the public interest.

In Perverse Subsidies, leading environmental analyst Norman Myers takes a detailed look at the subject, offering a comprehensive view of subsidies worldwide with a particular focus on the extent, causes, and consequences of perverse subsidies. He defines many different kinds of subsidies, from tax incentives to government handouts, and considers their wide-ranging impacts, as he:

The book provides a valuable framework for evaluation of perverse subsidies, and offers a dramatic illustration of the scale and dimensions of the problem. It will be the standard reference on those subsidies for government reform advocates, policy analysts, and environmentalists, as well as for scholars and students interested in the interactions between policymaking and environmental issues.

PART III. Policy
Chapter 10. What Shall We Do About It All?
- Big-Picture Strategies
- Supplementary Measures
- Subsidies to Support the Environment
- Perverse Subsidies and the Taxpayer: Some Better News