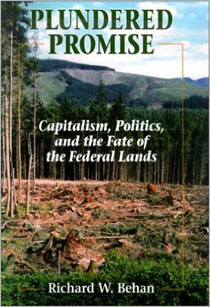 Capitalism, Politics, and the Fate of the Federal Lands

What has been done to our public lands? Irreplaceable forests harvested for lumber. Vast expanses of rangeland leased at rates far below market value. Mineral resources extracted with little or no royalties paid. These and other actions have brought unparalleled benefit to private interests -- and massive costs to society at large. They are but the most visible signs of the fundamental flaws in the current system of federal lands management. In Plundered Promise, leading resource management scholar Richard W. Behan presents an engrossing history and analysis of public lands management in the United States, as he describes how we arrived at the current situation and examines what we can do to rectify it.

Behan begins by outlining his provocative thesis that American political and economic institutions have overshot their historic roles, and, rather than responding to public needs, have drawn society into their service. He then offers a detailed analysis of the development of the federal resource management agencies from the nation's founding through successive legislative eras, highlighting the human actors responsible for their growth and change, and showing their relationship to the evolving institutions of American politics and capitalism.

The author's analysis ultimately focuses on the power of federal "iron triangles," and in particular the influence of the one nonpublic institution -- "the unfettered and immortal institution of the American corporation" -- that he holds responsible for the ongoing devastation of the public lands. Behan stresses the urgent need for reform and presents a radical proposal for getting there: The devolution of authority over public lands to "localized constituencies," and the reining in of corporations.

Behan's unique combination of social criticism, institutional analysis, history, and political science is guided by a strong moral compass, with a palpable sense of outrage bolstered by rigorous scholarship. The book is must reading for anyone interested in the past or future of our public lands, or in the influence of contemporary politics and capitalism.