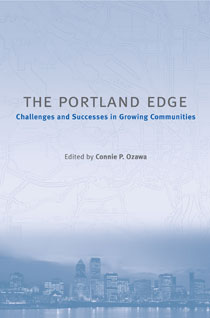 Challenges And Successes In Growing Communities

Portland, Oregon, is often cited as one of the most livable cities in the United States and a model for "smart growth." At the same time, critics deride it as a victim of heavy-handed planning and point to its skyrocketing housing costs as a clear sign of good intentions gone awry. Which side is right? Does Portland deserve the accolades it has received, or has hype overshadowed the real story?

In The Portland Edge, leading urban scholars who have lived in and studied the region present a balanced look at Portland today, explaining current conditions in the context of the people and institutions that have been instrumental in shaping it. Contributors provide empirical data as well as critical insights and analyses, clarifying the ways in which policy and planning have made a difference in the Portland metropolitan region.

Because of its iconic status and innovative approach to growth, Portland is an important case study for anyone concerned with land use and community development in the twenty-first century. The Portland Edge offers useful background and a vital overview of region, allowing others to draw lessons from its experience.

"Whether Portland is a model for Smart Growth and sustainability or is failing to address challenges of urban sprawl and affordable housing is one of the debates at the heart of this book, which examines how Portland's urban system and planning approaches actually work—an exploration applicable to other U.S. metropolitan areas."
Landscape Architecture Magazine

"With numerous photos, tables and figures, The Portland Edge is a text for urban livability."
Oregonian

Chapter 1. The Portland Edge in Context
Chapter 2. It's Not an Experiment: Regional Planning at Metro, 1990 to the Present
Chapter 3. Urban Redevelopment in Portland: Making the City Livable for Everyone?
Chapter 4. Dialectics of Control: The Origins and Evolution of Conflict in Portland's Neighborhood Association Program
Chapter 5. The Myth and Reality of Portland's Engaged Citizenry and Process-Oriented Government
Chapter 6. Community Radio in Community Development: Portland's KBOO Radio
Chapter 7. If Zealously Promoted by All: The Push and Pull of Portland Parks History
Chapter 8. Centers and Edges: Reshaping Downtown Portland
Chapter 9. The Reality of Portland's Housing Market
Chapter 10. Housing Density and Livability in Portland
Chapter 11. The Chapter Evolution of Transportation Planning in the Portland Metropolitan Area
Chapter 12. Keeping the Green Edge: Stream Corridor Protection in the Portland Metropolitan Region
Chapter 13. Portland's Response to Homeless Issues and the "Broken Windows" Theory

Conclusion
About the Contributors
Index