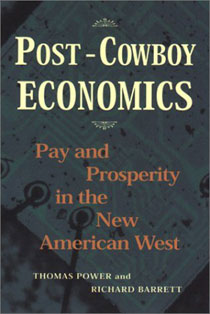 Pay And Prosperity In The New American West

A great deal of reactionary political fire in the Mountain West has been aimed at environmental protection measures that are perceived to have destroyed or diminished the livelihoods of long-time residents. Conventional wisdom sees the economic woes afflicting the region -- declining pay, growing inequality, persistent poverty -- as a direct result of increasingly strict environmental regulations that have crippled natural resource industries such as mining and logging.

In Post-Cowboy Economics, economists Thomas Michael Power and Richard Barrett provide a new interpretation of the economy of the Mountain West. Based on evidence from a wide variety of sources, including data on individual employment and income histories of more than 300,000 residents, they clearly demonstrate that the region's economic misfortunes are not the result of changes in regional industrial structure but rather are local manifestations of pervasive national and international trends. The authors:

The authors' analysis and interpretation make a compelling case that despite incomes that are low compared to the rest of the country, the region is not suffering from general impoverishment, and that environmental protection, rather than threatening economic well-being, enhances welfare and protects the very source of the economic vitality that the Mountain West enjoys. Throughout, they argue that fearful, crisis driven environmental and economic development policies are unnecessary and inappropriate, and often counterproductive.

Post-Cowboy Economics is an important work for professionals and scholars involved with environmental policy, economic development, and resource management, as well as anyone interested in the future of the American West.