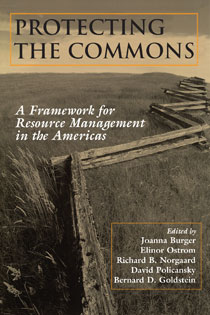 A Framework For Resource Management In The Americas

Commons—lands, waters, and resources that are not legally owned and controlled by a single private entity, such as ocean and coastal areas, the atmosphere, public lands, freshwater aquifers, and migratory species—are an increasingly contentious issue in resource management and international affairs.

Protecting the Commons provides an important analytical framework for understanding commons issues and for designing policies to deal with them. The product of a symposium convened by the Scientific Committee on Problems of the Environment (SCOPE) to mark the 30th anniversary of Garrett Hardin's seminal essay “The Tragedy of the Commons” the book brings together leading scholars and researchers on commons issues to offer both conceptual background and analysis of the evolving scientific understanding on commons resources. The book:

Protecting the Commons represents a landmark study of commons issues that offers analysis and background from economic, legal, social, political, geological, and biological perspectives. It will be essential reading for anyone concerned with commons and commons resources, including students and scholars of environmental policy and economics, public health, international affairs, and related fields.

About the Contributors
Index