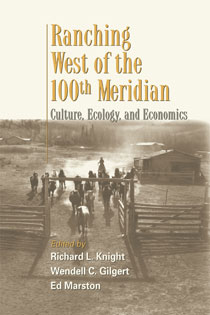 Ranching West of the 100th Meridian

Recommended by The Nature Conservancy magazine.

Ranching West of the 100th Meridian offers a literary and thought-provoking look at ranching and its role in the changing West. The book's lyrical and deeply felt narratives, combined with fresh information and analysis, offer a poignant and enlightening consideration of ranchers' ecological commitments to the land, their cultural commitments to American society, and the economic role ranching plays in sustainable food production and the protection of biodiversity.

The book begins with writings that bring to life the culture of ranching, including the fading reality of families living and working together on their land generation after generation. The middle section offers an understanding of the ecology of ranching, from issues of overgrazing and watershed damage to the concept that grazing animals can actually help restore degraded land. The final section addresses the economics of ranching in the face of declining commodity prices and rising land values brought by the increasing suburbanization of the West. Among the contributors are Paul Starrs, Linda Hasselstrom, Bob Budd, Drummond Hadley, Mark Brunson, Wayne Elmore, Allan Savory, Luther Propst, and Bill Weeks.

Livestock ranching in the West has been attacked from all sides -- by environmentalists who see cattle as a scourge upon the land, by fiscal conservatives who consider the leasing of grazing rights to be a massive federal handout program, and by developers who covet intact ranches for subdivisions and shopping centers. The authors acknowledge that, if done wrong, ranching clearly has the capacity to hurt the land. But if done right, it has the power to restore ecological integrity to Western lands that have been too-long neglected. Ranching West of the 100th Meridian makes a unique and impassioned contribution to the ongoing debate on the future of the New West.