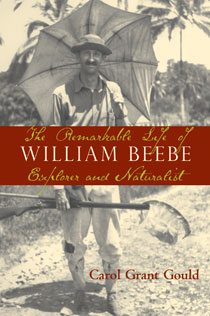 The Remarkable Life of William Beebe

When William Beebe needed to know what was going on in the depths of the ocean, he had himself lowered a half-mile down in a four-foot steel sphere to see-five times deeper than anyone had ever gone in the 1930s. When he wanted to trace the evolution of pheasants in 1910, he trekked on foot through the mountains and jungles of the Far East to locate every species. To decipher the complex ecology of the tropics, he studied the interactions of every creature and plant in a small area from the top down, setting the emerging field of tropical ecology into dynamic motion.

William Beebe's curiosity about the natural world was insatiable, and he did nothing by halves. As the first biographer to see the letters and private journals Beebe kept from 1887 until his death in 1962, science writer Carol Grant Gould brings the life and times of this groundbreaking scientist and explorer compellingly to light.

From the Galapagos Islands to the jungles of British Guiana, from the Bronx Zoo to the deep seas, Beebe's biography is a riveting adventure. A best-selling author in his own time, Beebe was a fearless explorer and thoughtful scientist who put his life on the line in pursuit of knowledge. The unique glimpses he provided into the complex web of interactions that keeps the earth alive and breathing have inspired generations of conservationists and ecologists. This exciting biography of a great naturalist brings William Beebe at last to the recognition he deserves.

"[Gould] has written a biography worthy of Beebe. It makes compelling and, better yet, inspiring reading for anyone interested in the natural world."
Seattle Times

"In this delightful book Carol Gould has brought to light something we may have forgotten: the intensive pursuit of natural history in the early part of the twentieth century. And there is no better way of telling the story than around the central and fascinating figure of William Beebe."
John Tyler Bonner, author of "Lives of a Biologist"

"A childhood spent collecting bugs and birds led William Beebe to a job at the Bronx Zoo and then to an extraordinary career of exploration, science, and writing. He wrote so beautifully of tropical and undersea wildlife that his books influenced thousands, he went deeper than anyone ever before to observe ocean depths, and he carried out plant-by-plant, bird-by-bird, beetle-by-butterfly studies that were among the first in tropical ecology. And yet he still found time to become a confidant of Teddy Roosevelt, a familiar of Noël Coward and Katherine Hepburn, and an accomplished tennis player. Carol Gould gained first access to Beebe's meticulous notes but delved much deeper. The result is an engrossing portrait of a very human but unusually important naturalist of the 20th century."
William Conway, Senior Conservationist, Wildlife Conservation Society

"William Beebe's life and work form a vital link between the age of Wallace and Darwin and today's heroes of conservation. Carol Gould's magnificent biography vividly brings Beebe to life. His life should be an inspiration both to future conservation biologists and to anyone who started out collecting bugs in their own back yard."
Andrew P. Dobson, author of "Conservation and Biodiversity"

"William Beebe was one of my boyhood heroes, who I followed through his articles in National Geographic Magazine. Now, thanks to the wonderful and thorough research of Carol Gould, I know the man behind those stories."
Dr. Robert D. Ballard, discoverer of the "Titanic"

"Drawing on Crane's records, made available in 1989, and a host of other sources, Gould has written an engrossing account of Beebe's professional and personal life, effectively compressing his decades of hyperactivity into a mere 400 pages."
Natural History