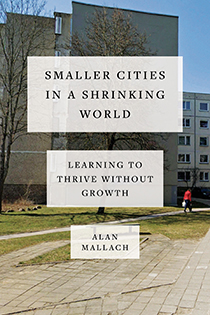 Smaller Cities in a Shrinking World

Learning to Thrive Without Growth

Over the past hundred years, the global motto has been “more, more, more” in terms of growth – of population, of the built environment, of human and financial capital, and of all manner of worldly goods. This was the reality as the world population boomed during the 1960s and 1970s. But reality is changing in front of our eyes. Growth is already slowing down, and according to the most sophisticated demographers, the earth’s population will begin to decline not hundreds of years from now, but within the lifetimes of many of the people now living on the planet.

In Smaller Cities in a Shrinking World, urban policy expert Alan Mallach seeks to understand how declining population and economic growth, coupled with the other forces that will influence their fates, particularly climate change, will affect the world’s cities over the coming decades. What will it mean to have a world full of shrinking cities? Does it mean that they are doomed to decline in more ways than simply population numbers, or can we uncouple population decline from economic decay, abandoned buildings and impoverishment?

Mallach has spent much of the last thirty or more years working in, looking at, thinking, and writing about shrinking cities—from Trenton, New Jersey, where he was director of housing and economic development, to other American cities like Detroit, Flint, and St. Louis, and from there to cities in Japan and Central and Eastern Europe. He has woven together his experience, research, and analysis in this fascinating, realistic yet hopeful look at how smaller, shrinking cities can thrive, despite the daunting challenges they face.

Introduction: The End of Growth
Chapter 1. The Past, Present, and Future Shrinking City: An Historical Overview
Chapter 2.  Demography As Destiny: Beyond the Demographic Transition
Chapter 3. A Restless Species: Migration and the Fate of Cities
Chapter 4. Land and Buildings in the Shrinking City: Households, Vacant Properties and the Urban Prairie
Chapter 5. Social and Economic Conditions in the Shrinking City: The Effects of Population Decline
Chapter 6. A Difficult Future: Three Global Challenges for the World’s Shrinking Cities
Chapter 7. Embracing the End of Growth:  Rethinking Cities in a Shrinking World
Chapter 8. Thinner, Greener Cities: Greening the Urban Environment
Chapter 9. Cities are People: Building a Sustainable Social and Economic Environment
Chapter 10. The Future of American Shrinking Cities: Can the United States Learn to Be a Smaller Country, and Can Cities Learn to Change?
Chapter 11. Learning to Thrive in a Shrinking World: How Do We Get There?

Endnotes
About the Author
Index