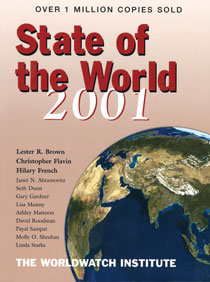 The Challenge of a Globalizing World

From the thinning of the Arctic sea ice to the invasion of the mosquito-borne West Nile virus, State of the World 2001 shows how the economic boom of the last decade has damaged natural systems. The increasingly visible evidence of environmental deterioration is only the tip of a much more dangerous problem: the growing inequities in wealth and income between countries and within countries, inequities that will generate enormous social unrest and pressure for change.