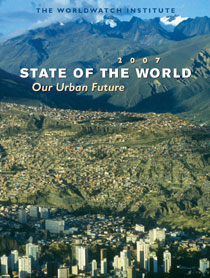 In 2008, half of the Earth’s population will live in urban areas, marking the first time in history that humans are an urban species. State of the World 2007: Our Urban Future examines changes in the ways cities are managed, built, and lived in that could tip the balance towards a healthier and more peaceful urban future.