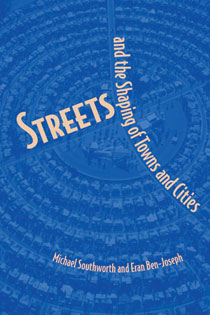 Streets and the Shaping of Towns and Cities

The topic of streets and street design is of compelling interest today as public officials, developers, and community activists seek to reshape urban patterns to achieve more sustainable forms of growth and development. Streets and the Shaping of Towns and Cities traces ideas about street design and layout back to the early industrial era in London suburbs and then on through their institutionalization in housing and transportation planning in the United States. It critiques the situation we are in and suggests some ways out that are less rigidly controlled, more flexible, and responsive to local conditions.

Chapter 1. Gritty Cities and Picturesque Villages
-The Origins of Suburban Design Standards in England and the United States
-A Brief Look at Street Design Standards of Antiquity
-The First Suburbs in England
-John Nash and Park Village
-Olmsted, Vaux, and the American Suburb

Chapter 3. Streets for the Motor Age
-The Car and the Urban Scene
-Movements for Road and Street Improvement
-The Car in the Early 1900s
-Early Responses to the Automobile
-The Rise of Comprehensive Planning
-Stein, Wright, and Radburn
-Perry, Adams, and the Neighborhood Unit
-European Modernism and the Vision for New Streets
-The Asphalt Path
-The Institute of Transportation Engineers Is Born