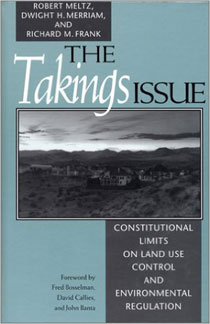 Constitutional Limits On Land Use Control And Environmental Regulation

As challenges to land use and environmental controls by landowners and the property-rights movement have become more frequent, the concept of "takings" -- government action that excessively limits a property-owner's use of private land -- has become both increasingly familiar to the public, and increasingly problematic for planners, local officials, and anyone involved with making day-to-day decisions about land use. A vast and diverse body of case law has come into existence over the past several decades, and the controversy generated by recent legal decisions has resulted in a significant level of ideological bias in much of what has been written on the topic.

This volume is an objective and authoritative examination that considers all aspects of the takings issue. It is a much-needed guide and overview that introduces and explains issues surrounding regulatory takings on the local, state, and federal level for anyone involved with private land and government limitation of its permissible use. The authors describe where the law is now, predict where it might go in the future, and review conflict-reducing solutions to a variety of situations. They condense an immense amount of information into a clear and accesible format, making the book equally valuable for lawyers and non-lawyers alike.

The Takings Issue addresses procedural hurdles involved in getting a takings issue heard by a court, examines what does and does not constitute a taking, and considers the remedies available to landowners involved in takings actions. It treats concerns such as zoning, dedications and exactions, subdivision platting, and other local issues in some detail, and also considers state and federal issues involving industrial site approval, endangered species and wetlands protection, restrictions on access to resources on federal lands, and other topics.

The book is an essential reference for planners, land use lawyers, developers, and students of planning and law, as well as for policymakers and citizens involved with takings issues.