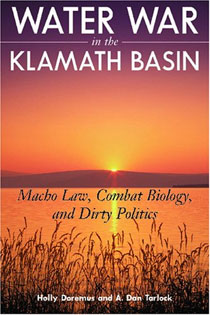 Water War in the Klamath Basin

In the drought summer of 2001, a simmering conflict between agricultural and environmental interests in southern Oregon’s Upper Klamath Basin turned into a guerrilla war of protests, vandalism, and apocalyptic rhetoric when the federal Bureau of Reclamation shut down the headgates of the Klamath Project to conserve water needed by endangered species. This was the first time in U.S. history that the headgates of a federal irrigation project were closed—and irrigators denied the use of their state water rights—in favor of conservation. Farmers mounted a brief rebellion to keep the water flowing, but ultimately conceded defeat.

In Water War in the Klamath Basin, legal scholars Holly Doremus and A. Dan Tarlock examine the genesis of the crisis and its fallout, offering a comprehensive review of the event, the history leading up to it, and the lessons it holds for anyone seeking to understand conflicts over water use in the arid West. The authors focus primarily on the legal institutions that contributed to the conflict—what they call “the accretion of unintegrated resource management and environmental laws” that make environmental protection so challenging, especially in politically divided regions with a long-standing history of entitlement-based resource allocation.

Water War in the Klamath Basin explores common elements fundamental to natural resource conflicts that must be overcome if conflicts are to be resolved. It is a fascinating look at a topic of importance for anyone concerned with the management, use, and conservation of increasingly limited natural resources.

"Doremus and Tarlock utilize the Klamath Basin issue to offer us a reality check for the role of science in influencing public policy."
Natural Areas Journal