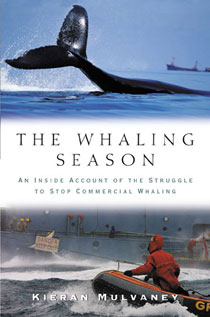 An Inside Account Of The Struggle To Stop Commercial Whaling

Despite a decades-long international moratorium on commercial whaling, one fleet has continued to hunt and kill whales in the waters surrounding Antarctica. Refusing to let this defiance go unchallenged, the environmental organization Greenpeace began dispatching expeditions to the region in an effort to intercept the whalers and use nonviolent means to stop their lethal practice.

Over the past decade, Kieran Mulvaney led four such expeditions as a campaigner and coordinator. In The Whaling Season, he recounts those voyages in all their drama, disappointments, strain, and elation, giving readers a behind-the-scenes look at the hazards and triumphs of life as an environmental activist on the high seas. The author also explores the larger struggles underlying the expeditions, drawing on the history of commercial whaling and Antarctic exploration, the development of Greenpeace, and broader scientific and political efforts to conserve marine life. He presents a rich portrait of the current struggles and makes an impassioned plea for protection of some of the world’s most spectacular creatures.

For armchair adventurers, polar enthusiasts, and anyone concerned about marine conservation and continued hunting of the world’s whales, The Whaling Season is an engrossing and informative tale of adventure set in one of the Earth’s last great wilderness areas.

Chapter 1. Beginnings
Chapter 2. South from Singapore
Chapter 3. Life and Death at the End of the Earth
Chapter 4. Cat-and-Mouse Among the Icebergs
Chapter 5. Contact
Chapter 6. A Brief History of the Mismanagement of Whaling
Chapter 7. Chronicle of a Voyage from Hell
Chapter 8. "Great God! This Is an Awful Place ...."
Chapter 9. Sanctuary
Chapter 10. A Place Called Paradise
Chapter 11. Red-Handed
Chapter 12. Vote Buying, Canny Proposals, and Fish-Eating Whales
Chapter 13. One Last Roll of the Dice Epilogue