Moderator: Andre Jimenez, Green2.0
A long-time environmental advocate, Andrés joined Green 2.0 as the organization's first full-time Executive Director this past June. Andrés is a strategic thinker, a relationship-builder and carries a deep, empathetic connection to the communities he advocates for. He previously served as Senior Director of Government Affairs at Citizens Climate Lobby where he worked to expand the lobby's voice and advocate for relevant legislation. Andrés has also served as the Associate Director of Government Relations at Ocean Conservancy, with a focus on creating bipartisan solutions for critical issues like ocean acidification and sustainable fisheries in the United States. Andrés has a strong history of public service, having worked for the New York City’s Mayor’s office, the House Judiciary’s Immigration Subcommittee, Congresswoman Linda Sanchez and Congressman Howard Berman. He is an active member of GreenLatinos, serves on the board for Ecotropics, and is a member of the Green Leadership Trust. Additionally, he is an appointed Planning Commissioner in his own community of Fairfax, VA.

Panelist: Nathaniel Smith, Partnership for Southern Equity
Through founding and leading the Partnership for Southern Equity (PSE), Nathaniel Smith advances policies and institutional actions that promote racial equity and shared prosperity for all in the growth of metropolitan Atlanta and the American South. Among the organization's notable accomplishments are the creation the American South’s first equity mapping tool, the Metro Atlanta Equity Atlas, and the building of a coalition in support of expanding Atlanta’s metropolitan transit system. A child of the Civil Rights Movement and Atlanta native, Smith holds a BA in Urban Studies from Morehouse College and a Master of Science from the New School. The Huffington Post honored Nathaniel as one of eight “Up and Coming Black Leaders in the Climate Movement” in 2017, and he was named one of the 100 “Most Influential Georgians” by Georgia Trend magazine in 2018, 2019 and 2020. His work has been featured in the U.S. News and World Report, Chronicle of Philanthropy, Nonprofit Quarterly, Atlanta Journal-Constitution, and Atlanta Voice, among others.

Panelist: Jennie C. Stephens, Northeastern University
Jennie C. Stephens is the Director of the School of Public Policy and Urban Affairs at Northeastern University, where she is also the Dean’s Professor of Sustainability Science & Policy. She is also Director of Strategic Research Collaborations at Northeastern’s Global Resilience Institute and is a member of the Executive Committee of Northeastern’s Women, Gender, Sexuality Studies program. She has written on this topic for professional and mainstream media including Science and the Wall Street Journal. Jennie is the author of Diversifying Power: Why We Need Antiracist, Feminist Leadership on Climate and Energy.

This webinar was recorded on September 30, 2020 during Current Events - Urban Resilience, a virtual conference hosted by Ticco with support from Island Press. To learn more about this event visit go-ticco.co/ce-retreat. For additional information about Ticco and events like this one visit go-ticco.co. 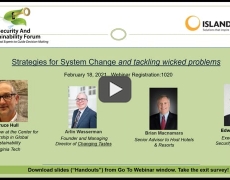