As the senior scientist and director of the Food and Environment Program at the Union of Concerned Scientists, Ricardo Salvador has over four decades of experience working with citizens, scientists, economists, and politicians to transition our current food system into one that grows healthy foods while employing sustainable and socially equitable practices.
Before coming to UCS, Dr. Salvador served as a program officer for food, health, and well-being with the W.K. Kellogg Foundation. In this capacity, he was responsible for conceptualizing and managing the Foundation’s food systems programming. He partnered with colleagues to create programs that addressed the connections between food and health, environment, economic development, sovereignty, and social justice.
Prior to that, he was an associate professor of agronomy at Iowa State University. While at ISU, Dr. Salvador taught the first course in sustainable agriculture at a land-grant university, and his graduate students conducted some of the original academic research on community-supported agriculture. He also worked with students to establish ISU's student-operated organic farm, and with other faculty to develop the nation’s first sustainable agriculture graduate program in 2000; Dr. Salvador served as the program’s first chair. Dr. Salvador also worked as an extension agent with Texas A&M University.
Dr. Salvador has been interviewed by the BBC, Wall Street Journal, Financial Times, National Public Radio, Democracy Now!, MSNBC, The Boston Globe, and many other leading global publications. In addition, he has authored opinion columns for The New York Times, The Guardian, and The Washington Post, including a 2014 call for a coherent national food policy, which has influenced the thinking of many decision makers in government and the private sector about the imperatives for food and farm policy.
He advises a range of scientific, advocacy and social justice organizations, including the the National Academy of Sciences, Engineering and Medicine, The International Panel of Experts in Sustainable Food, The Land Institute, The Center for Good Food Purchasing, FoodCorps, the HEAL Food Alliance and others.
Dr. Salvador earned a B.S. in agricultural science from New Mexico State University. He holds an M.S. and Ph.D. in crop production and physiology from Iowa State University. 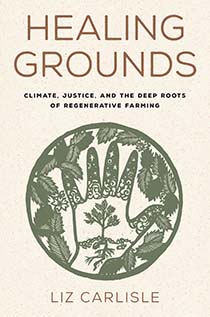 Climate, Justice, and the Deep Roots of Regenerative Farming
More

A powerful movement is happening in farming today—farmers are reconnecting with their roots to fight climate change. For one woman, that’s meant learning her tribe’s history to help bring back the buffalo. For another, it’s meant preserving...