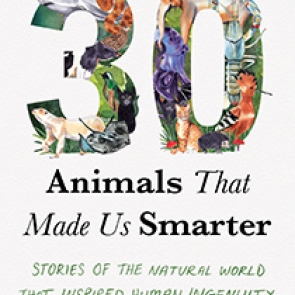 An Inside Look: Animals That Inspire Human Ingenuity

The natural world is full of problem solvers. Through trial and error, each species has adopted their own solutions to the most complex challenge of all: basic survival. Through the adoption of adaptations, nature itself could be considered the ultimate research and development lab. Humans making use of this R&D is biomimicry.

In this conversation, wildlife biologist, TV host, and BBC podcaster Patrick Aryee will tell you stories of biomimicry from his new book, 30 Animals That Made Us Smarter. Aryee will be joined by moderator Sara Aly El Sayed, Co-Director of The Biomimicry Center. Together, they'll reveal the exceptional powers of animals and change the way you look at the natural world forever. 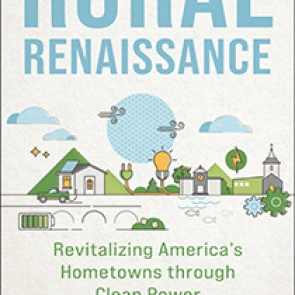 Mike Lux Media is hosting climate leader and Obama administration alumna Michelle Moore for a breakfast book party to launch her new book Rural Renaissance: Revitalizing America’s Hometowns through Clean Power. We'll discuss her roadmap for success over bagels, fruit, and coffee. It's free to attend, but please register so we can get an accurate headcount for catering. Come grab a bagel and a book before heading over to the convention center. 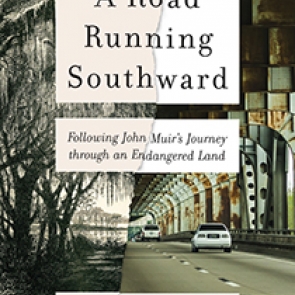 Veteran Atlanta reporter Dan Chapman, distressed by sprawl-driven environmental ills in a region he loves, recreated John Muir's journey to see for himself how nature has fared since Muir's time in new book A Road Running Southward. Channeling Muir, he uses humor, keen observation, and a deep love of place to celebrate the South's natural riches. But he laments that a treasured way of life for generations of Southerners is endangered as long-simmering struggles intensify over misused and dwindling resources. Chapman seeks to discover how Southerners might balance surging population growth with protecting the natural beauty Muir found so special. Each chapter touches upon a local ecological problem--at-risk species in Mammoth Cave, coal ash in Kingston, Tennessee, climate change in the Nantahala National Forest, water wars in Georgia, aquifer depletion in Florida--that resonates across the South. Chapman delves into the region's natural history, moving between John Muir's vivid descriptions of a lush botanical paradise and the myriad environmental problems facing the South today. Along the way he talks to locals with deep ties to the land--scientists, hunters, politicians, and even a Muir impersonator--who describe the changes they've witnessed and what it will take to accommodate a fast-growing population without destroying the natural beauty and a cherished connection to nature.

A Road Running Southward is part travelogue, part environmental cri de coeur, and paints a picture of a South under siege. It is a passionate appeal, a call to action to save one of the loveliest and most biodiverse regions of the world by understanding what we have to lose if we do nothing.

Dan Chapman is a writer, reporter, and lover of the outdoors. He grew up in Washington DC and Tokyo, the son of a newspaperman and an English teacher. He worked for Congressional Quarterly, The Winston-Salem Journal, The Charlotte Observer, and The Atlanta Journal-Constitution. He has also reported from Asia, Europe, and the Middle East. He currently writes stories about conservation in the South for the U.S. Fish and Wildlife Service.

Georgann Eubanks is a writer and Emmy-winning documentarian. Her most recent books are The Month of Their Ripening: North Carolina Heritage Foods through the Year and Saving the Wild South: The Fight for Native Plants on the Brink of Extinction. 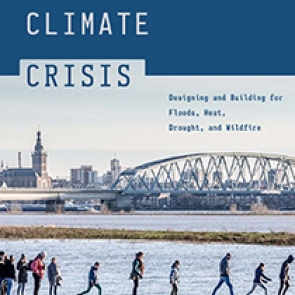 Managing the Climate Crisis: Designing and Building for Floods, Heat, Drought and Wildfire

The climate, relatively stable for centuries, is entering a new phase. In 2020, 22 major weather and climate events in the U.S. resulted in 262 deaths, with each causing more than $1 billion in damages. This trend is continuing with heat waves, extended droughts, extended wildfire seasons, and increased coastal and river flooding.

Join the Smart Growth Network at 1:00 p.m. EDT on Tuesday, August 23, as Jonathan Barnett and Matthijs Bouw talk about their new book Managing the Climate Crisis: Designing and Building for Floods, Heat, Drought, and Wildfire. Barnett and Bouw will outline how adaptation and preventive measures can be used to address climate-related threats, including flooding along coastlines and rivers, flash floods from extreme rain events, drought, wildfire, long periods of high heat, and food shortages.

Participants of the live webinar are eligible for 1.5 AICP CM credits and 1 Sustainability and Resilience credit (live attendance required). Register with Island Press. 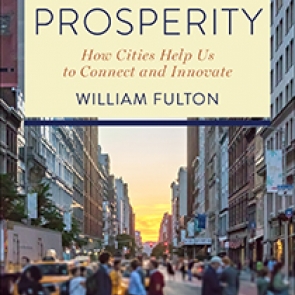 Please note: face masks are required to attend the event.

There are few more powerful questions than, “Where are you from” or “Where do you live?” People feel intensely connected to cities as places and to other people who feel that same connection. In order to understand place – and understand human settlements generally – it is important to understand that places are not created by accident. They are created in order to further a political or economic agenda. Better cities emerge when the people who shape them think more broadly and consciously about the places they are creating. In Place and Prosperity: How Cities Help Us to Connect and Innovate, urban planning expert William Fulton takes an engaging look at the process by which these decisions about places are made, how cities are engines of prosperity, and how place and prosperity are deeply intertwined. Fulton has been writing about cities over his forty-year career that includes working as a journalist, professor, mayor, planning director, and the director of an urban think tank in one of America’s great cities. Place and Prosperity is a curated collection of his writings with new and updated selections and framing material.

William Fulton is one of America’s most established thought leaders in the field of urban planning. He currently serves as a Senior Advisor to PFM Management and Budget Consulting and a Fellow at the Terner Center for Housing Innovation at UC Berkeley. From 2014 to 2022, he served as the director of Rice University’s Kinder Institute for Urban Research. He is a former Mayor of Ventura, California, and Director of Planning and Economic Development for the city of San Diego. His previous books include Guide to California Planning, the standard urban planning textbook in California, The Reluctant Metropolis: The Politics of Urban Growth in Los Angeles, which was a Los Angeles Times best-seller, and The Regional City: Planning for the End of Sprawl (with Peter Calthorpe). Fulton holds master’s degrees in mass communication from The American University and urban planning from the University of California, Los Angeles.

Luis Guajardo is an urban and regional planning professional dedicated to fostering equitable and sustainable communities through planning, design, and policy. His work consists of policy research at the Kinder Institute for Urban Research in housing, transportation, land use, resilience, and urban design. Luis is also the director of the American Planning Association’s Houston section and is excited to discuss Place and Prosperity with one of his mentors – William Fulton – a nationally-renowned thought leader on cities and urbanism. 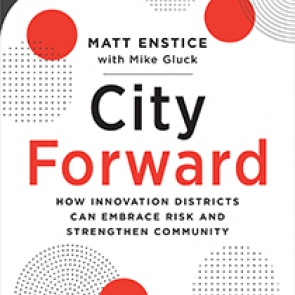 Join us for a virtual seminar led by Matt Enstice, President & CEO of the Buffalo Niagara Medical Campus (BNMC).

In his new book, City Forward: How Innovation Districts Can Embrace Risk and Strengthen Community, Matt explains how BNMC works to promote a shared goal of equity among companies and institutions with often opposing motivations and intentions.

In this discussion, Matt offers insight about how innovation districts can speak about equity in an inclusive manner and keep underrepresented voices at the decision-making table.

This event is in partnership with Island Press.