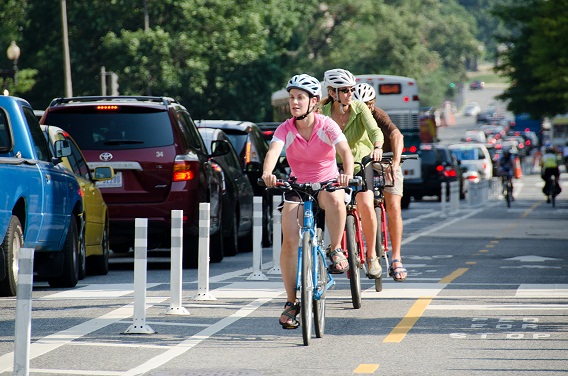 Fall weather has enveloped Washington DC over the past couple of weeks—crisp, refreshing air that urges the trees to change color and puts a little flush on your cheeks as well.  I’ve been a bit chilly on my bike rides into work lately—cruising along the walking/biking Custis Trail that borders Interstate 66 as I ride from Arlington into downtown DC.  And yet, I’m always sweating by the time I’ve made it from Pennsylvania to L Street, and it has nothing to do with the weather.  It’s stress. DC has made impressive investments in cycling infrastructure over the past two years and there are more exciting opportunities on the horizon.  I mention the challenges of my commute to emphasize that bike lanes are important, and make a huge difference in increasing safety, for both drivers and people on bikes.  Penn and L are wide streets and major commuter arteries into the city. This means lots of cars, and cars that drive faster than on narrower, residential streets.  Throw in a garbage truck or two, and the occasional cab swerving to pick someone up for an early morning meeting, and if you don’t feel vulnerable on a bike, you should probably be in a line of work that requires something like swimming with tigers. To help address these kinds of gaps in the bike lane network, DC is getting a boost from the attentions of the Green Lane Project, an effort launched in 2012 by the Bikes Belong Foundation. It aims to help the city elevate its cycling infrastructure to being world class.  As part of its outreach, Bikes Belong has released a short, engaging, well-illustrated guide to implementing bike lane networks, called Explain Your Lane: Lessons for Cities, from Cities, on Building Green Lanes. It’s available for free download and I encourage everyone to read it—whether you bike or not—to understand what the future of commuting in our country looks like, and what it will take to implement much-needed changes. Although I love commuting by bike (danger and all), and appreciate that it is “environmentally-friendly”, one thing needs to be clear: cities like DC aren’t making investments in bike lanes out of the goodness of their sustainable hearts. Offering alternatives to driving is increasingly seen as a way to attract corporations looking to create jobs in places that will offer high quality of life for their employees.  I’m grateful that I can spend 4.5 miles of my ride on protected paths, and look forward to the day when anyone, anywhere in the city can hop on a bike and cruise around worry-free.  The work that Bikes Belong is doing resonates with me for personal reasons, but on a larger scale, they’re working to create safer, greener, and more economically vibrant cities— and that should interest everyone, no matter what kind of transportation you prefer.
bikes
cities
infrastructure