Skip to main content
Home   /   Blog   /   Deja Vu in Kiwi-Ancient Forests
To the untrained eye, New Zealand forests have a tropical feel somewhat out-of-character in a temperate world. Like Australia, these rainforests owe their existence to the ancient ark of Gondwana that broke away from Pangea at a time when dinosaurs were still flourishing.  Some of the species like giant Kauri trees have lineages dating back 100 million years. 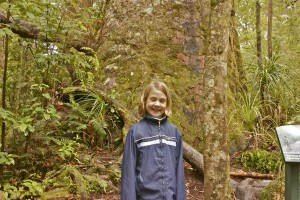 Father of the Forest - Giant kauri estimated at over 2000 years old. Photo credit Dominick DellaSala.
And when it comes to temperate rainforests, New Zealand has a lot to boast about. Isolation from mainland areas and long lineages have provided the backdrop for a maternity ward of unique species. Nearly 80% of the flowering plants, conifers, and ferns are endemic (found nowhere else). Reptiles give birth to live young and frogs completely skip the tadpole stage. Many birds are flightless and threatened because of introduced predators (mostly rats and opossums). And many of the conifers are unique – known as podocarps because seeds are not concealed in scaly cones like northern hemisphere conifers. New Zealand’s temperate rainforests can be grouped into two classes: conifer-broadleaf and southern or Antarctic beech. In this blog, I will focus on the conifer-broadleaf forests (a later blog will describe beech forests) and the giant Kauri trees. About 3 hours north of New Zealand’s largest city – Auckland –pockets of Kauri trees punctuate the forest canopy in the Waipoua Forest. As I walked along a trail into the dense forest, I was overcome by the enormity of the largest tree that the Maori call Te Matua Ngahere  - or “Father of the Forest.” And what a granddaddy it is. Its trunk measures more than 16 meters across (>50 feet) and it stands as tall as a five-story building. While not as tall as a redwood, it was wider than any tree I had seen. Kauri trees branch repeatedly at the top and tend to grow disproportionately in width. Most of these giants were cut down by two centuries of logging both by the Maori before European settlement and then by Europeans that nearly finished the job. In spite of the majestic nature of these trees, on my journey back to Auckland I was struck by the audacity of New Zealand forestry practices outside this protected area. Most New Zealand conservationists will tell you that the battle over logging was won years ago when New Zealanders agreed to end logging of what remains of its native forests (nearly two-thirds were already logged) and instead focused its wood production on existing plantation management. However, I was struck by the similarities in sign-propaganda that I also reported on in my visit to the Olympic rainforest, where misleading signs boasted about stewardship practices that were non-existent. 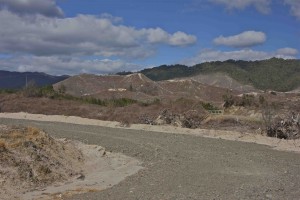 New Zealand's industrial forestry practices outside reserves. Photo credit Dominick DellaSala.
Along one of the main highways where extensive plantation and clearcut logging had occurred (see photo) a timber industry sign resembled something out of a George Orwell novel – “Please take care of our forest, it’s busy saving the world.” Ironically, New Zealand forests are indeed busy saving the world but the sign was in the wrong place and should have advertised the importance of saving remaining native, uncut forests in the Waipoua and others like it. While plantations supply important wood products, New Zealand forestry practices leave much room for improvement. Massive clearcuts, use of exotic pines, and an explosion of invasives like scotch broom resemble tree-cutting practices on the Olympic Peninsula – Orwellian propaganda sign and all! New Zealanders have a lot to celebrate as they have made prudent choices for protecting remaining and globally significant native forests. As climate change impacts New Zealand, what needs to happen next is for management of protected areas to increasingly deal with numerous invasive plants and animals outcompeting native species and to focus on making improvements in forestry practices outside reserves. Until then, regarding those forestry signs on the Olympics or in New Zealand, George Orwell would be rolling in his grave! Dominick A. DellaSala is chief scientist and president of the Geos Institute in Ashland, Oregon, and president of the North American section of the Society for Conservation Biology. He is the author of Temperate and Boreal Rainforests of the World: Ecology and Conservation.
biodiversity
forests
logging
rainforests