Skip to main content
Home   /   Blog   /   Green Cities: Inspiration from Europe
It is fitting that I am here in Vitoria-Gasteiz, the capital of the Basque country of Spain, on the occasion of the launch of our new edited book Green Cities of Europe. This beautiful city represents much of what I have come to admire about European cities and why I have spent so much of my life over the last twenty years visiting and studying them. It is a city that is now getting a degree of important and deserved recognition around Europe (and beyond). It holds the title of European Green Capital for 2012, a prestigious award, and one now highly coveted among European cities. The fact that such an award even exists (and is now so highly competitive) speaks to the value placed on the green and sustainable agenda here in Europe, and the 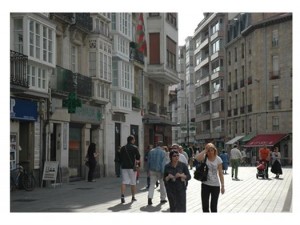 collective support and attention to how cities can be places with exceptional quality of life and also profoundly more sustainable. Vitoria is using the Green Capital moniker as a platform for extending even further its green accomplishments, including a bold new proposal to restore and daylight an ancient stream that used to flow through the center of the city. Vitoria-Gasteiz boasts the essential qualities of place and urbanity that we expect from European cities (see also London, Paris, Freiburg, Helsinki, Copenhagen, and Venice in Green Cities of Europe). It is, like most Spanish cities, a compact and immensely walkable city—a place where density is delivered on a human scale, and where history and art and delightful public spaces define everyday life. It is a city that has managed the delicate balance of modernity and antiquity (of which there is much), fusing tradition with investments in such things as modern public transit and in infrastructure for walking and bicycles. In European cities like Vitoria, incredible efforts have been made to protect, preserve and restore the nature about them (made easier by a compact urban form). Here the city is well known for its Green Belt that circles the city, and of course like most European cities there is a clear and sharp demarcation where the city and urbanized end and the surrounding countryside and larger natural landscapes 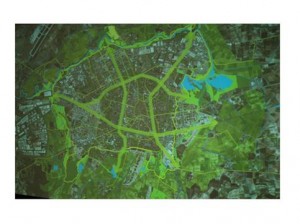 begin.  The Green Belt provides an unusual and impressive degree of nature for residents of this city, from the Salburua wetlands (former site of the city’s airport), to the habitats of the Zadorra river, to the extensive market gardens. Nearly 100% of the residents of Vitoria-Gasteiz live within 300 meters of a green area, and nearly a third of the urbanized area of the city is in parks and nature. It is easy to get to even quite large natural areas as a result of the city’s extensive network of trails and footpaths. Especially interesting is the City’s effort to develop an “interior” green belt while connecting the greenspaces around the city with larger blocks of nature beyond. The institutional underpinnings of nurturing a life of caring about and contact with nature are here, as well, for instance through the creation of a stand-alone, city-funded Environmental Studies Center, and the building of a most impressive new ecology visitors center, now at the core of the city’s efforts to educate about the environment. Vitoria-Gasteiz is not unique among European cities. Indeed many of my best examples of Biophilic Cities—cities that create the conditions for contact with and closeness to nature—are European. Oslo, with two-thirds of the city in protected forest, and extensive trails and nature areas, or Helsinki with its integrated green network—are some of the best examples of cities that are truly and literally green. Several years ago I participated in the making of a documentary film “The Nature of Cities”, and many of our most compelling stories were from these cities—Paris, where Patrick Blanc’s green walls grace the facades of department stores, or Stockholm, where the large Eko Park that sits in the center of the city, and is so essential to its recreational and emotional life. There are deep cultural and historical differences, of course, that help to make much of t 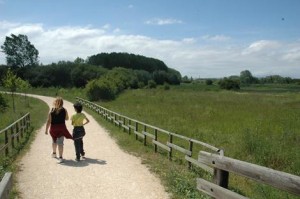 his green urban agenda more possible in Europe. In Spanish cities, like Vitoria, for instance, there has been a lifestyle of spending less time in one’s flat or home—entertaining or socializing with friends means time at the café or plaza. As a result, it is perhaps not surprising that the average size of a new flat or home in Spain is about half that of the US. Arguably though, demographic and economic trends, and a shifting paradigm about what constitutes the good life in the US, is trending us ever more in the direction of the Spanish model, and more than ever before it can be argued the European model of green cities should have traction. There are now many more compelling American cities and stories to show and tell than there were twenty years ago when I started this work, and in many respects American and European cities are 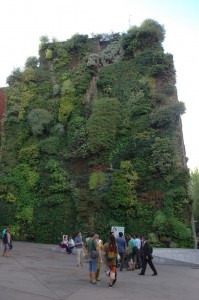 closer in terms of their green achievements. There have been some impressive success stories in translating and applying European green urban ideas—extensive ecological rooftops, car sharing, and bike sharing, come to mind.  American planners and designers, and the city officials and citizens who employ them, have always found inspiration and hope in European models and this will likely continue. While there are many lessons that American cities have to offer their counterparts, I suspect the European urban scene will still be understood as a reference point for judging the success of green urbanism today and in the near future. I hope our new edited volume Green Cities of Europe will play a small part here. As I complete the writing of this blog I am about to board an intercity train that will easily and effortlessly deliver me in a few short hours south to Madrid. European cities remain the gold standards for innovations and investments in public transit and in finding ways to de-emphasize or curtail dependence on cars. Few trips in the US are yet this easy, or enjoyable, and this like so many other journeys and visits reminds me of the value of learning from European cities.
biophilic cities
cities