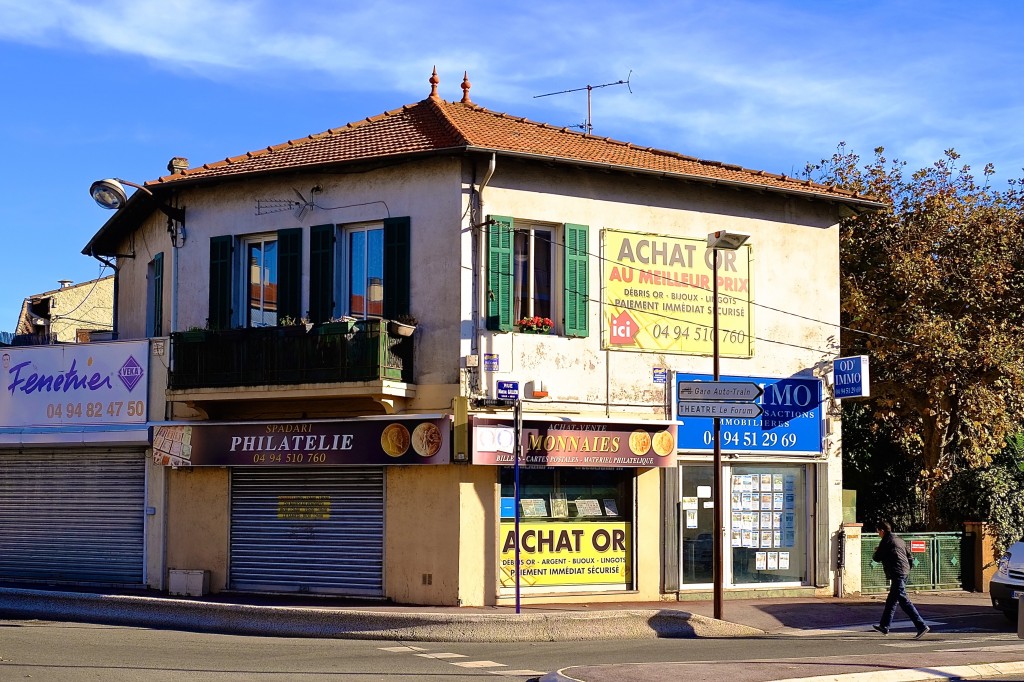 Cross-posted from Charles R. Wolfe’s blog at the Huffington Post with permission. Photo copyright Charles R. Wolfe. On a walk from Fréjus to Saint-Raphaël last week, an elderly man asked us, in French, why I had just taken a photograph of his house. I offered to erase the photograph, which was intended to show, in modern urbanist visual language, the delight of a stamp and coin shop as first floor retail at an intersection across the world from our hometown. I re-learned that day what every urbanist should know: The physical city means less without the stories behind building facades. Sometimes we only learn such lessons while abroad, when acclimating to a new, temporary neighborhood, or when answering a question as simple as the one just stated. After all, the human dimension, of affinity and conversation is broader, and arguably more important, than the human scale that we hear so much about. The story continues with the elderly man acknowledging us as Americans, who were more interested in the storefront than the dwelling above. Suddenly, we were no longer suspects, not the tax inspectors or police that could have been. There was no need, he said, to erase the photograph. Suspicion yielded to enthusiasm and affinity, and his tales of visits to Wyoming and Yellowstone. He provided an introduction to the stamp and coin store proprietor, his son, Roland Spadari. The younger Mr. Spadari is a regular U.S. visitor, shy about his English, but quietly aware of his commonalities with the people who come through his door. Father and son invited us into the store, and we became neighbors in a city that spanned an ocean. Conversation spilled forth about American coins from another era—from Indian Head pennies to Buffalo nickels to Mercury dimes. We commiserated about what these coins once looked like and discussed whether we ever see them anymore back home. We politely listened as Mr. Spadari, explained, with his father looking on, how he obtained Buffalo nickels and Eisenhower dollars on his annual trip to Las Vegas last year. And then we said our goodbyes, and thanked Mr. Spadari for his hospitality. My coin and stamp collection habits ended long ago, so I was in the market for nothing more than continuing our walk. But the power of the human dimension carried matters beyond their logical conclusion. On our way out, Mr. Spadari gave me three Buffalo nickels—to keep—at no charge. It took 30 minutes for suspicions about a photograph to become a thoughtful, affinity-based gift of items that transcended place and time. That's the power of the real dynamics of city life, the connections behind the built environment that we, at first, more readily see.
cities
mixed-use
urbanism