Skip to main content
Home   /   Blog   /   Time for British Columbia Provincial Government to Stand...
British Columbia is endowed with the 7.4 million hectare Great Bear Rainforest and adjacent offshore archipelago of Haida Gwaii, one of the few remaining large blocks of comparatively unmodified landscapes on earth. The Great Bear includes over a quarter of the Pacific Coastal rainforests of North America and is home to spectacular wildlife and prodigious salmon runs that are increasingly rare around the world. However, these productive rainforests have been reduced by 50-75 percent on Vancouver Island in the region’s southern terminus. In 2001 historic agreements—known as the Great Bear Agreements—were reached with First Nations, the British Columbia provincial government, logging companies, and conservation groups. Unfortunately, the government has yet to fully implement them. After years of protests and market campaigns aimed at shifting timber consumption away from endangered rainforests, the provincial government committed to the agreements. Initially, 2 million hectare of new protected areas were established and “light touch logging”—ecosystem-based management—was agreed to take place outside protected areas. 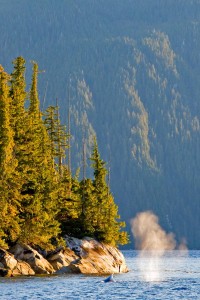 Humpback whale along Princess Royal Island, part of the Great Bear Rainforest of British Columbia (photo credit - Tim Greyhavens)
In 2009, transitional logging regulations enacted by the government resulted in 50 percent of the old-growth forests being designated off limits to logging, but conservationists and scientists would like to see that increased to 70 percent in order to sustain the vital ecosystem benefits these forests will increasingly be relied on to provide in a changing climate. New information on forest carbon sinks shows that Great Bear rainforest may play an important role in helping to stabilize the global climate, as this rainforest stores an estimated 1.8 billion tonnes of carbon, the equivalent of nearly 100 times the province’s official annual greenhouse gas emissions. When rainforests are cut down, up to 40 percent of their stored carbon is released as a global warming pollutant. Thus, protecting old-growth rainforests is key to the region’s climate change insurance. The Great Bear agreements are an exemplary model of conservation that hopefully will one day be replicated for all the world’s rainforests. Protecting rainforests of all types is a major part of the efforts to strengthen the sustainable management and conservation of forests that have been inspired by the United Nations 2011 International Year of Forests. Canada has a unique opportunity to demonstrate its global leadership on sustainability; however, it has been slow to enact the milestones reached in 2009 and is approaching the critical March 2013 deadline for full implementation. With imminent threats posed to intact rainforests around the globe, the BC government should be commended for reaching these agreements in the first place but urged to demonstrate their full commitments to the agreements by sealing the deal.   Sources: Carbon storage estimates extrapolated from Keith et al. 2009, converted to CO2-equivalents, and then compared to annual greenhouse gas emissions in BC. Carbon logging loss estimates from: Harmon, M.E., S. L. Garman, and W.K. Ferrell. 1996. Modeling historical patterns of tree utilization in the Pacific Northwest: carbon sequestration implications. Ecological Applications 6:641-652.
forests
rainforests