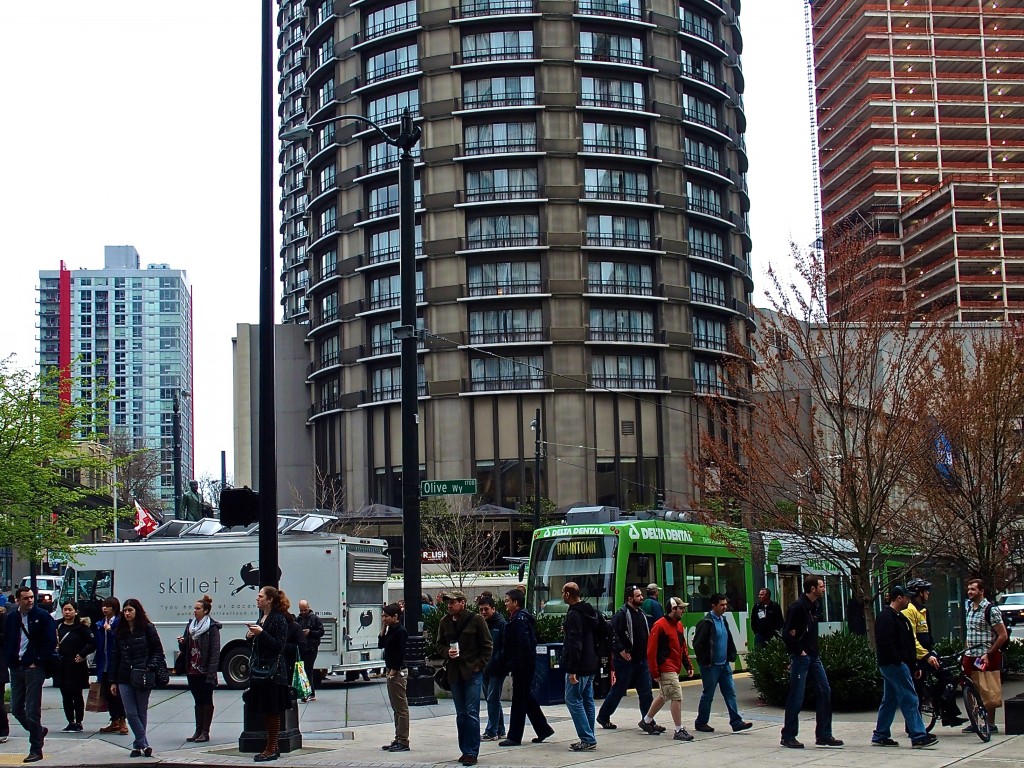 Photo by Charles R. Wolfe.
In Seattle, last week, I looked across the intersection of Fifth Avenue and Olive Way, into McGraw Square, and towards the Westin Hotel, noting a Seattle urbanism trifecta—the Lake Union Streetcar, the skillet food truck and one building of Amazon's new headquarters complex under construction. What's not to like about that view? Well, one thing for sure. I saw a ghost, of a missing building from a boyhood memory—something that Amazon might have retrofitted, today, if it were still there for the taking. Gone from this layered, contemporary scene was something significant to the history of Seattle, the Orpheum Theater, demolished in 1967, once the largest theater in the Pacific Northwest, and the temporary home of the Seattle Symphony. Begun as a vaudeville house, the design, by theater architect Marcus Priteca also featured street-level retail, and offices—a reminder that mixed-use development is nothing new. I specifically remember my last trip to the Orpheum, to view the Batman movie from the original television show; notable because local actor Adam West portrayed Bruce Wayne as the winged avenger. But this is not a tale of Batman over streetcars. Nor is this an essay about the retention of historic theaters for the preservationist's cause. Rather, this is a manifesto about the role of purposeful observation and sensation in urban environments, and acknowledgement of the undercurrents and overlaps that form cities today. In capturing the photograph above, as an acknowledged urbanist, perhaps I should revel in the streetcar and food truck scene, with an expanded McGraw Square allowing greater pedestrian use. Instead, I hold that scene in perspective, because I'm old enough to recall what was there before. I'm also an inductive, first person urbanist, always looking for context in what I see. Amid urban change, I see ghosts of bygone images, wondering, ironically, about their unrealized role in today's vitality. This approach, allowing for and explaining the stories behind our redeveloping cities, should not be viewed as antiquarian, academic or obstructionist. For example, similar memories of the native American trail that traveled from Elliot Bay to Seattle's Lake Union, have spurred the Seattle Parks Foundation-led "Lake2Bay" initiative, which endeavors to create a multifaceted urban innovation corridor. I'd like to think urban observation and collective urban memory are as important to the authenticity of urban change today as the oral histories among indigenous people who pass on cultural traditions from one generation to the next. 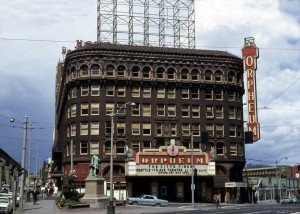 The Orpheum in 1967, photo by Lawton Gowey, featured on Seattle Now and Then. 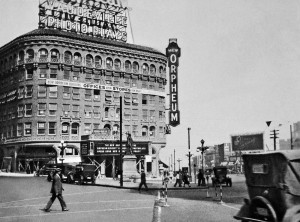 The Orpheum in 1927, photo by John Thomas, featured on Seattle Now and Then.
The tool of human memory, discerning eyes and understanding both the pragmatism of the present and the symbolic, collective meaning of a given place are often left behind in today's discussions of urban solutions. Hence my past adamance in Urbanism Without Effort and many articles, where I refer to the importance of the urban diary tool, "place-decoding" skills and "reading cities cover to cover", in holistic fashion. I have urged urbanists to create urban diaries and to see their surroundings, to gain a real understanding of cities where we work and live. Of course, in many respects, I'm channeling those involved in the urban realm for years, both as practitioners and academics. For example, former San Francisco Planning Director and academic Allan Jacobs is perhaps best known for setting this tone in the 1980's, and Jan Gehl and Birgitte Svarre have recently summarized the value, history, and many examples of why "studies" of public life are essential to urban policy in How to Study Public Life. While it is increasingly possible through smartphone applications, Google Earth overlays and other tools (see, e.g. Drivedecisions) to compile surveys, aggregate data, and represent such information three dimensionally or numerically for purposes of decision-making or political debate, we often lose the most important human elements when we disallow the importance of looking at cities and their component parts, even if they are no longer there. Similarly, modern-day tool kits are lacking, in my opinion, because they often don't fully equip leaders in policy and decision-making to understand the multifaceted urban world. While we have recipes for code-drafting and repairing suburbs and sprawl, we don't have enough guides for public officials or staff to be confident in legislating many intrinsic elements of a successful urbanism, as once summarized by Jacobs (Allan, not Jane) and the late Donald Appleyard, such as deriving place from placelessness, retaining authenticity, livability, intensity, integration, diverse public spaces and ways. This is critically important, because project advocacy, both pro and con, is often based on personal perception, observation or visual simulation, stylized in support or opposition to inevitable change. As Jacobs  wrote in 1984, (in association with his book, Looking at Cities) about the value of simply observing cities and trusting what we see:

"Looking at and taking messages from urban environments should be as important a research and analytic method as any other that we choose to use, one used in conjunction with others both as a discrete research act and as a constant part of our professional and personal lives."

In the past, my own attempts to voice this perspective in book talks and on professional panels have surprised some audience members who ask why a lawyer—trained by his profession to give pragmatic advice—is espousing the human messages of urban design, and suggesting that inductive observation and place-based memory can impact the urban environment in a practical way. I smile and note that I am not centering on architectural style, or mimicry of a remnant historical structure or natural ecosystem. Nor am I an environmental psychologist, or "placemaking" professional. Rather, I am talking about how, in the city, human beings wrestle with nostalgia, seek continuity, and observe and face inevitable change. In particular, what purpose does remembering a now-missing theater—however intangible and historical—play in this Seattle example described here? Is there an essence, spirit, or symbol of the former use that could play a role in urban redevelopment or revitalization? Does the ghost somehow still have game? Perhaps, honoring the story entirely missing in last week's photograph could stimulate more meaningful attention to the uniqueness of the setting and the lost uses of the area's space.  In this general locus, consider the following enhancements to place: In sum, when framing urban issues, describing cities or developing profiles of a specific place, the detailed variations in the individual perceptions of urban dwellers and observers should not be lost. These subtle messages are often spurred by ordinary urban landscapes, icons, emblems, symbols and "context clues" within ready view, contributing to an understanding of why a place looks and feels like it does today, and what might now be missing but potentially renewed.
architecture
cities
history
urbanism