Skip to main content
Home   /   Blog   /   Who Bikes and Walks? And Why?
Cross-posted with permission from the Alliance for Biking & Walking's blog. Does everybody walk and bike, or are there differences in gender, income, age, and race? In this excerpt from the 2014 Benchmarking Report, we take a look at who bikes and walks in the United States.

How much do people bike and walk?

First, it's important to understand where our data come from. We have two main sources of information about who bikes and walks: the National Household Travel Survey (NHTS) and the American Communities Survey (ACS). (See a more in-depth look at the differences between the ACS and the NHTS here.) The NHTS asks Americans to keep a travel diary of all trips, then counts how people got around over a certain amount of time. NHTS data tells us a lot about mode share, but the survey is conducted irregularly and does not have a large enough sample size to warrant breaking down results by state and city. The 2014 Benchmarking Report uses data from the 2009 National Household Travel Survey. Here's how United States trips broke down by mode of transportation, according to the 2009 NHTS: 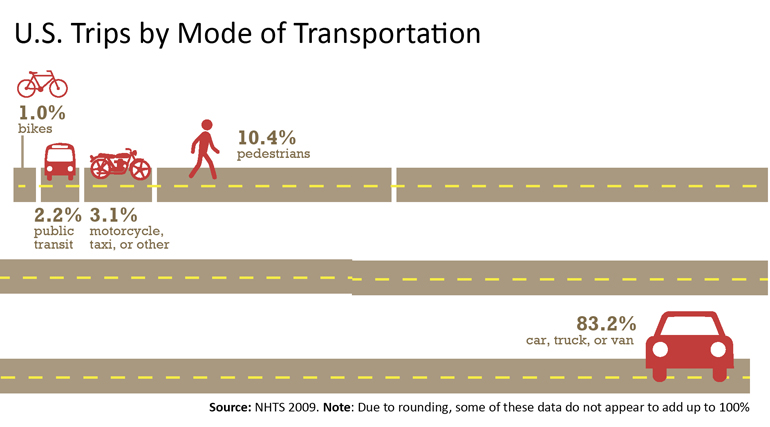 The ACS, on the other hand, is conducted every year and incorporates feedback from a larger sample of Americans, but only asks about trips to work. The 2014 Benchmarking Report zeroes in on 2011 American Communities Survey data, the most recently available data when we began analysis. According to the National Household Travel Survey, a minority of walk and bike trips are trips "to earn a living." Work trips represent only 13% of bike trips and 6% of walking trips, which gives a sense of the number of walking and biking trips that the American Communities Survey misses.

Still, the American Communities Survey has some interesting data about who bikes and walks to work. Overall, the percentages of people commuting to work by bike and on foot are gradually increasing again, following a dropoff from 1990 - 2005.

Visit the Alliance's blog to read the full post, which breaks down the data by gender, age, income, and race/ethnicity.
bikes
cities
data
transportation
urbanism
walkability