Skip to main content
Home   /   Blog   /   Are the United Kingdom’s Coastal Woodlands...
This August I traveled to Glasgow to keynote a symposium on temperate rainforests at the European Congress of Conservation Biology (Society for Conservation Biology). Having never set foot in a European rainforest, I was especially challenged by the invitation to help put these rainforests on a global map of conservation importance (the theme of my rainforest book, Temperate and Boreal Rainforests of the World), and so set out to learn more about these unique ecosystems. In particular, the UK’s temperate rainforests are fragmented emeralds in a sea of human-modified landscapes impacted by people dating back to the retreat of the last ice age. Climatically, they meet the definition of a rainforest, and on the British Isles they are extremely wet places moderated by the Gulf Stream. But these rainforests are vertically challenged compared to the more statuesque rainforests of North America, Chile, and Tasmania, some with trees no taller than 3 meters. I was able to get a firsthand look at a UK woodland rainforest during a post-conference field trip to the hazel woods located at the southeastern tip of the Isle of Seil, close to Oban, western Scotland. Here, I visited the world-renowned (for its lichen richness) Ballachuan Hazel Wood Reserve, an encounter that challenged my North American perception of rainforests as cathedrals of giant trees. In the UK, hazel wood is managed as semi-natural woodland where conservationists often struggle to maintain some naturalness in the vast sea of humanity.  In this Atlantic woodland, hazel “trees” barely rise above the ground, windswept by North Atlantic storms. Their dense canopies are so tightly knit that sunlight barely reaches the ground beneath them. And viewed up close the trees themselves yield unexpected surprises. Despite their dwarf-like appearance, an individual hazel wood grows as a 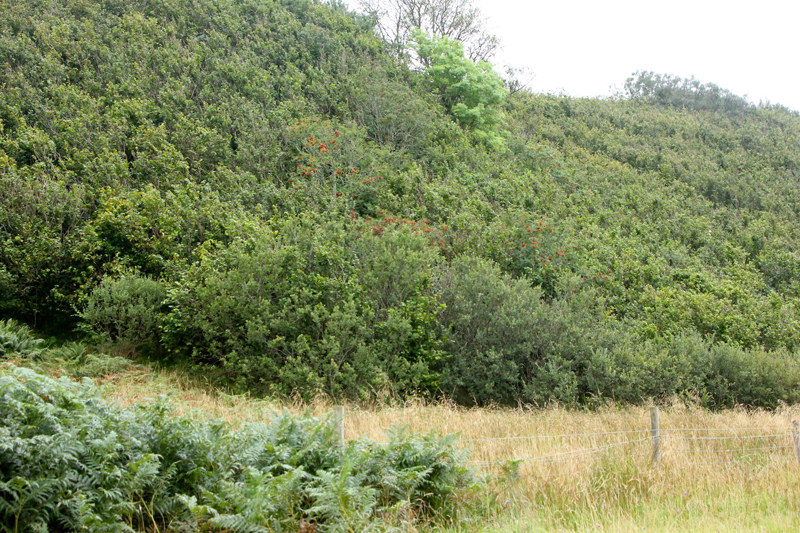 Ballachuan Woodland Reserve, western Scotland - other than the red-berried rowan (center), this predominately dwarf hazel woodland qualifies as temperate rainforest based on high moisture and rich oceanic epiphytic lichens. Photo - D. DellaSala
cluster of stems connected at its base like a multi-legged stool. Individual hazel wood stools themselves are often arranged in a circle of genetically related stools that are reborn repeatedly on the same microsite for thousands of years. Clearly, this is old growth on a geological time scale—a sort of stool immortality! The beauty of hazel woodland is in the eye of the beholder, provided that the beholder has a hand lens to peek into the cryptic world of lichens clinging to its branches. Hazel wood provides the nooks and crannies for a rich bryophyte (e.g., mosses) and lichen community (more than150 lichen species can be present on a single site), many of which are imperiled (red-listed in Europe). Up close and personal, the epiphytic lichens (referring to their canopy position) are connected to each another like pieces in a three-dimensional jigsaw puzzle. Compared to lichen-rich rainforests, vascular plant life is sparse throughout most of Europe due to island biogeographic factors, high latitudes, and repeat glaciation events and this is why, in part, the understories of these rainforests are noticeably deficient in plant life. Lichens, on the other hand, are transcontinental dispersers, colonizing new terrain during interglacial timescales and forming rich communities. Even though lichens and the hazel wood species that support them are small by rainforest standards, they are Paralympians of these diminutive woodland communities. Rainforest lichens are barometers of air quality, and many of them fix nitrogen and cycle important nutrients. Lichens are the salad course for hungry ungulates and countless invertebrates; tiny fungal spores rob them of vital nutrients, and when they die lichens become the substrate for the next generation. High lichen richness can be an indicator of low human impact—a rarity on the European continent—since many lichens decline when the rainforest canopy is disturbed, are sensitive to air pollution, or, in this case, die-off when hazel wood is coppiced (repeat cutting of tree stems). Why the particular ancient woodland at the reserve was spared long ago is guess work. Perhaps prehistoric civilizations had a particular fondness for protein-rich hazel nuts. Or maybe it was because they carefully removed young stems for basket weaving without damaging the hazel wood stool. Whatever reason, hazel woods are contemporary giants from the viewpoint of their principal occupants, the lichens. If European rainforests are to take their place alongside better-known rainforests, biologists will need to become better storytellers to justify their continued existence. Giving meaning to rainforests in places like hazel woodlands begins with seeing the rainforest for the lichen, small but important cogs in nature’s verdant wheel that connect worlds within a world.
biodiversity
forests
rainforests