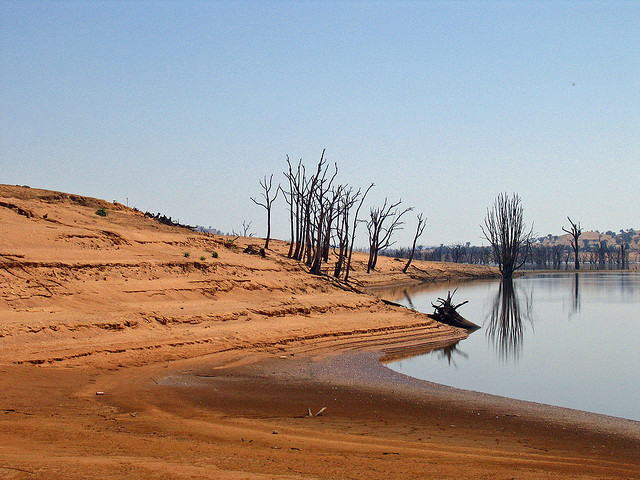 Lake Hume in the Murray-Darling Basin. Photo by Tim J. Keegan, used under Creative Commons licensing.
Editor's note: Brian Richter will be on Colorado Public Radio today talking about how we can better manage water resources like the Colorado River. In the piece below, republished with permission, he explores lessons we can learn from the Murray-Darling basin. In 1997 a ministerial council representing four Australian states and the capital territory took a remarkably bold step: The council instituted a firm limit on the total volume of water that could be extracted from the Murray-Darling River basin. “The Cap,” as it became known, froze water use at a level equal to ~ 40% of the average annual volume of river flow. Capping water use in a place that is challenged with water scarcity will likely seem counterintuitive to many governments or water planners. Why would a government want to impose limits on access to water and thereby limit the economic productivity of a region? And why leave 60% of the natural average volume in the river? The Murray-Darling Basin Ministerial Council’s rationale and the historical events that led to The Cap offer some important lessons for other states and countries struggling with water scarcity, from California to Texas, and from China to Syria. In my new book Chasing Water (2014), I emphasize that capping consumptive water use in each river, lake, or aquifer is an essential element in sustainable water management. The recent history of the Murray-Darling Basin illustrates very well what can otherwise go wrong when the volume of water consumption is allowed to approach or exceed the limits of water availability and reliability. It is an all-too-familiar story—one that is playing out today in California, Texas, the Colorado River Basin, and in many other water-stressed regions of the world.

The Perils of Water Scarcity

During the latter half of the 20th century—with a development history closely mirroring that of the western United States—the use of water in the Murray-Darling Basin grew very rapidly. Large storage reservoirs were built to capture most of the basin’s runoff, and extensive irrigation systems were constructed to enable farming to expand in this arid region that receives only 18 inches of rainfall each year. The basin became the breadbasket of Australia, generating more than half of all farm revenue in the country, with exports to Asia and other regions growing rapidly. By 1990, farmers and towns in the basin were consuming about half of the average natural water supply. To many of the residents of the basin, the fact that half of the river’s average water supply still remained unused seemed to suggest plenty of opportunity for continued growth in water use. But as so many communities and countries around the world have learned through painful experience, water averages can be as ethereal as a mirage, and basing water allocations on average water availability can lead to devastating impacts to local communities, economies, and natural ecosystems. The danger of water averages relates to the fact that they obscure the reality of variable water supplies; some years bring a lot of water, but others yield very little. The long-term average annual water supply in the Murray-Darling Basin is ~ 26 million acre-ft, but nearly 100 million acre-ft of water has flowed through the Murray-Darling Basin in wet years, and dry years have seen as little as 6 million acre-ft. If communities are unable to immediately adjust their water needs when confronted with less-than-average years, they can quickly become ensnared in a water shortage. As I note in Chasing Water, it appears that communities become highly vulnerable to water shortages when water allocations or rights begin to exceed 50% of the long-term average water availability, because drought periods can bring half as much water as is available on average, and it is exceedingly difficult to reduce water consumption quickly enough to avoid running out of water during a drought. When the Aussies hit a dry spell in 1991, with water use at an all-time high, the Darling River—the Murray River’s main tributary—nearly dried up. With little water to dilute the farm nutrients that had accumulated in the river, the lower 1,000 kilometres of the river quickly turned into a toxic, stinking ooze of blue-green algae, killing just about everything that lived in the river, tainting public drinking water supplies, and causing the state of New South Wales to declare a state of emergency. It was a brutal wake-up call. The Murray-Darling Basin Ministerial Council, representing the water interests of all water users sharing the basin, realized it was time to take bold action to change the way water was being managed in the Murray-Darling Basin. In its adoption of The Cap in 1994 (formally implemented in 1997), the council sought to achieve two critically important goals: (1) to ensure a secure water future for water users in the basin and (2) to protect the ecological health of the basin’s fisheries, wetlands, and other freshwater ecosystems. The council realized that the volume of water rights that had been issued in the basin substantially exceeded the volume of water that could be relied on in dry years, and the council understood that water shortages damaged not only river health but the water-dependent economy of the basin as well. If water consumption could be brought down to a more sustainable level, those economic and ecological impacts could be avoided in the future. Considerable scientific and economic analysis went into the setting of The Cap. But the Aussies faced a huge challenge to meet The Cap: Water rights would somehow need to be reduced from 50% of the long-term average water availability to 40%, a reduction in use of 2 million acre-ft. 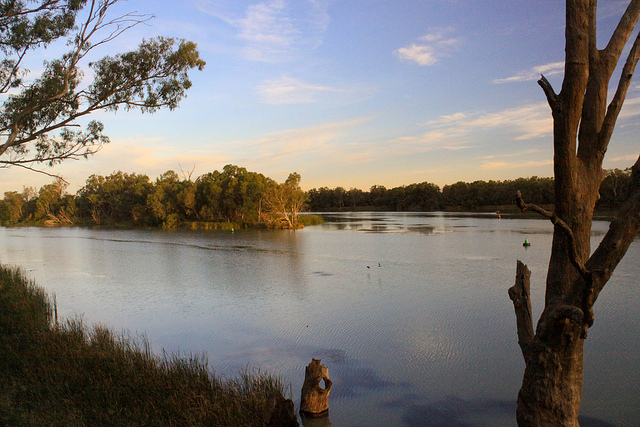 At the junction of the Murray and Darling rivers. Photo by Mike Russell, used under Creative Commons licensing.

Subsidizing Reductions in Consumptive Use

The initial solution was to begin buying the water rights back from willing sellers. The Murray-Darling Basin Ministerial Council launched an ambitious initiative in 2002 called “The Living Murray.” The council committed $700 million to the program during five years to purchase 400,000 acre-ft of water rights, to be held by the Commonwealth (federal) government and used for environmental purposes. However, this reduction in water consumption was nowhere near the 2 million-acre ft cutback called for by The Cap, and at the turn of the century the Aussies soon found themselves in the midst of the most horrific drought in the country’s history. The Millennium Drought of 1997–2009 nearly dried up all of the reservoirs in the basin. River flows throughout the basin were only 40–60% of average. Many farmers received no water allocations whatsoever for three years. Dairy production fell by 14%, cotton fell by 25%, meat by 50%, and rice farming stopped almost entirely. To accelerate reductions in water use, in 2007 the Commonwealth government passed a “Water for the Future” initiative, appropriating more than $3 billion to buy back more water from willing sellers, and another $6 billion to subsidize improvements in irrigation-efficiency measures designed to save water. As a result, during the past six years the Australians have made giant strides toward reducing water consumption to a more sustainable level in the Murray-Darling Basin.

One of the most important lessons learned from the Australian experience is that it can be extremely expensive—and socially disruptive—to redress the over-allocation of water. Communities and governments should take heed of the need to cap water extraction proactively and thereby avoid the pain of water shortages. 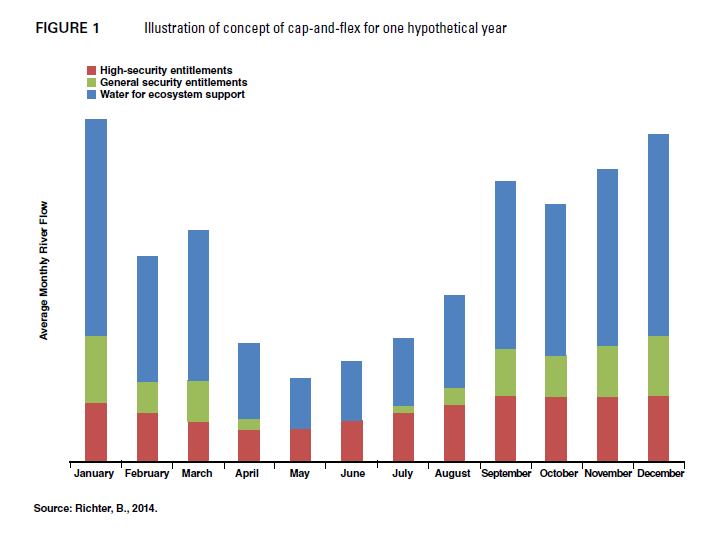 In Chasing Water I have outlined a cap-and-flex approach to water allocation that is designed to avert water shortages, protect freshwater ecosystems, and optimize the use of available water. As illustrated in Figure 1, this concept is based on two tiers of water rights. The total volume of high-security entitlements is set at a fixed level for each month of the year and is limited to the water volume that can be expected during the worst drought conditions; this volume is set at a level that reserves adequate water to remain in rivers to support their ecological health. An additional volume of low-security entitlements (the flex) is granted on the basis of the wettest years to be expected, but in each year of implementation the volume of these low-security rights is adjusted according to actual water availability. In this manner, a high degree of certainty is provided to the holders of highsecurity rights, and additional water use is enabled whenever greater volumes of water are available in wetter years. Another important lesson to be taken from the Australian experience is that water conservation—both on farms and in cities—is usually the most cost-effective way to reduce the consumptive use of water. When a particular water source has been over-allocated, it may be desirable or necessary for governments to subsidize investments in water efficiency so that the devastating consequences of water shortages can be avoided. Last, it is important to acknowledge that imposing a cap on water extractions from any particular water source may cause local communities to seek additional water sources to meet their needs, particularly if those needs are growing. Those additional water sources, ranging from water reuse to importation to desalination, should not be tapped until water conservation is maximized because of its cost-effectiveness and environmental compatibility. However, if the time comes to pursue additional water sources, similar care should be taken to guarantee that those additional sources are not over-allocated themselves, thereby ensuring that all water sources will be managed sustainably.
Australia
laws
rivers
water