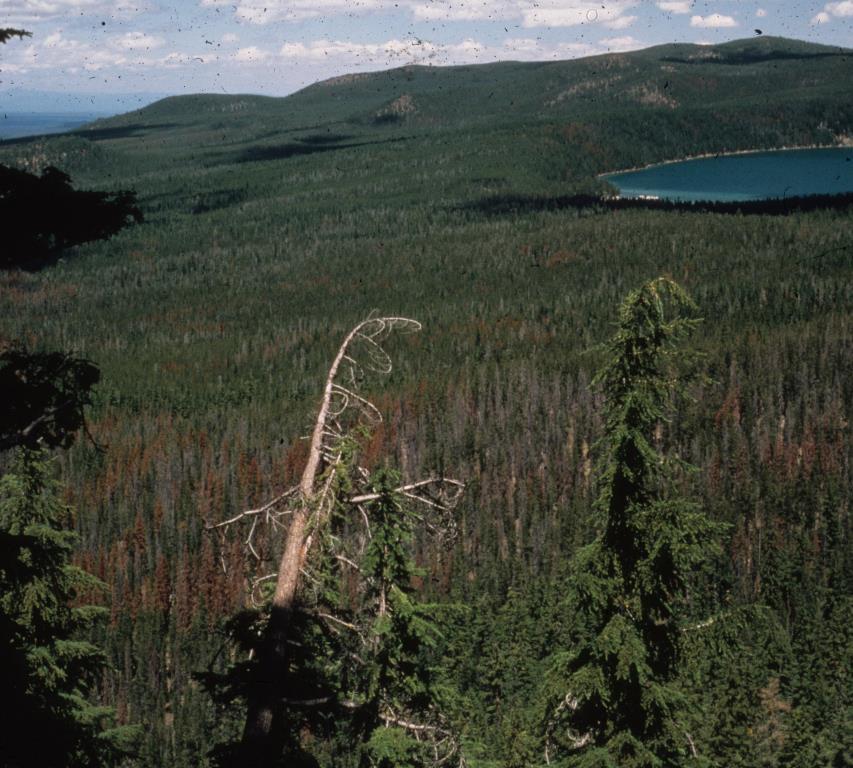 Brown crowns denote lodgepole pine killed by bark beetles the previous year.
As we reached the ridge overlooking the headwaters of the Deschutes River in central Oregon, we saw thousands of dead lodgepole pine trees. Gary Pitman, a bark beetle expert at Boyce Thompson Institute, said he didn’t think he’d ever seen such an outbreak. And this one was still spreading. Historically, wild fires would have killed these trees well before they reached old age, which would have then renewed the forest by opening resinous cones and spilling their seeds onto ash-crushed soil. Fire protection postpones this natural sequence only temporarily and allows fuel—in the form of deadfall and brush—to accumulate. 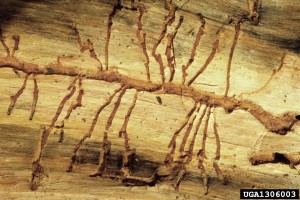 Galleries under the bark increase in width as bark beetle larvae mature and eat their way toward freedom and flight.
Bark beetles kill quickly by introducing a blue-stain fungus that clogs the tree’s plumbing, unlike other insects that generally only weaken trees by chewing on the leaves or sucking sap. As the tree dies, the female beetles lay eggs under the bark in the sugar-rich tissue. When the larvae hatch, they eat their way through a thick layer of nutritious (phloem) cells. Larvae create an expanding network of tunnels as they grow, ending in a hole from which mature beetles fly to breed and attack new trees. 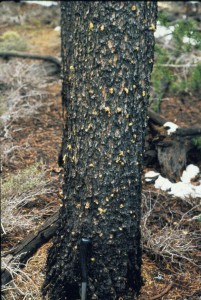 A tree’s first defense against bark beetles is to exude pitch around the attacking insects.
Last year, we stood on this same ridge and selected the area below as our experimental site, having convinced the National Science Foundation’s panel that this was the perfect place to test whether old trees could bolster their immune system to resist beetle attack. We chose the most decrepit forest we could find, but were gambling that we could get 120-year-old trees back into condition to resist an imminent beetle attack. Some trees are killed without putting up much of a fight, while others inundate the beetles with resin, creating distinctive pitch tubes. Such different responses indicate that a tree’s health is important. Perhaps we could alter growing conditions to improve the chances of survival? Like people, trees are not all the same. To judge their health, we needed a measurement that compensated for differences in size. We reasoned that big trees have more leaves than smaller trees and should grow larger stems. Measuring the number of leaves on a tree was the challenge. Sapwood is the plumbing through which water flows from the roots to the leaves, so was it possible that the area of these pipes conducting water would be proportional to the number of leaves? I knew—based on evidence provided by volunteer labor from my family the previous summer, when they plucked and weighed the foliage on ten trees that I cut down—this was true. With a borer that pulls a thin plug from the trunk, we were able to extract wood cores and measure the width of the growth rings and thickness of the sapwood. The water-conducting sapwood, when held up to the light, is translucent compared to the inner heartwood. And when beetles are able to kill a tree, they introduce a fungus that turns this sapwood blue. With a diameter tape and borer, we estimated the area represented by wood growth at breast height and compared that with the area of sapwood, a surrogate for leaf area. In a natural forest, where trees are unequally spaced, the ratio of annual wood production to total sapwood area varies from less than 1 percent to 10 percent. This ratio would be our measure of tree vigor. 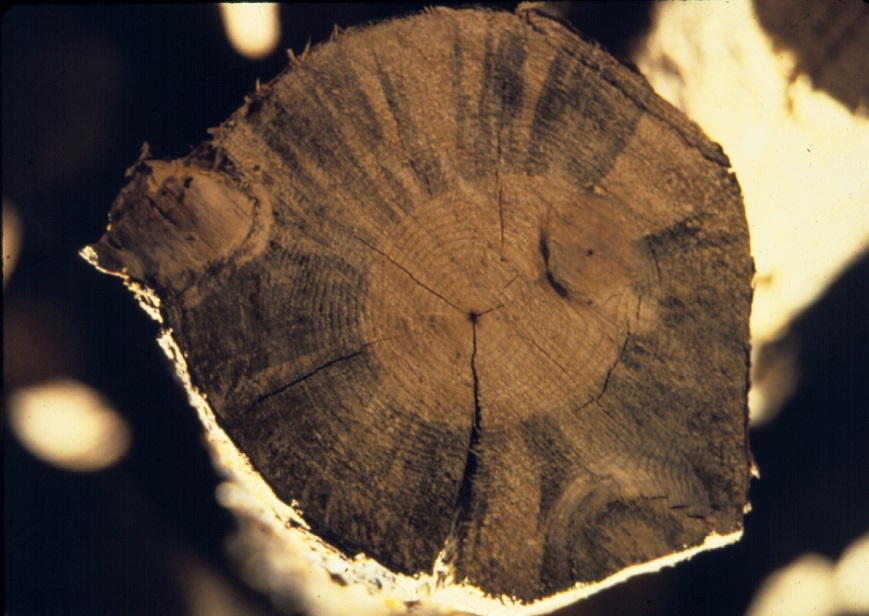 When a tree’s sapwood is completely plugged with blue-stain fungus, it’s functionally dead, although the leaves remain green until the following summer.
What could we do to improve the health of huge numbers of trees quickly? Nothing subtle would do. First, we added a half-ton of nitrogen fertilizer per acre to some areas. Elsewhere, we shoveled on sawdust, topped with brown sugar, to caused soil microbes to go into a feeding frenzy that left few nutrients available to the trees. To create the best possible conditions to inspire trees to regain some of their youthful vigor, we felled 80 percent of their neighbors and added nitrogen to the soil. To account for climatic variation from one year to the next, we left some of the forest untreated. Our plots were laid out like a checkerboard across 22 acres. Each treatment was repeated four times, and buffer strips isolated the treatments from one another. We tried to attract beetles to all of our plots by distributing vials filled with a volatile mixture of “essences of pine trees” that mimicked the scent (pheromone) produced by female beetles. We stored the brew in a glass vial with a pin-hole in the screw-top lid to allow the vapor to escape as the temperature rose. In late September, with the first flakes of snow falling, it was time to record tree mortality based on tell-tale sawdust appearing on the bark. The initial results were scary: A higher percentage of trees on the fertilized plots succumbed to beetle attack than on the plots left untreated or sugared. Had we made matters worse? In time, a familiar pattern emerged, but only a few trees responded quickly enough initially to put up much of a fight. By the third year, a different pattern emerged: Many trees with less competition from their neighbors, even on the plots where only the beetles thinned the forest, resisted attack. Only trees on the most nitrogen-impoverished plots, where sugar and sawdust was added, failed to reclaim some of their youthful vigor. The healthier a tree, the more beetles it took to kill it; and the healthiest individuals were rarely attacked by any beetles. 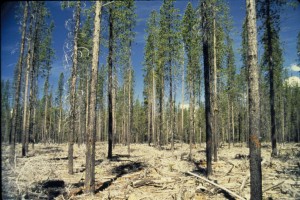 Heavy thinning of lodgepole pine stands reduce the probability of bark beetle attack.
In a war against beetles, learning how the enemy fights changed how the Deschutes National Forest is managed. Foresters now try to thin before beetle populations build, and the results are dramatic. In a broader sense, the recognition that trees have immune systems similar to ours opened eyes to a new way of looking at natural disturbances, which nearly always reduces competition for the seedlings, samplings, or mature trees, which leads to a healthier forest. Thanks to Lise Waring for editing assistance.
biodiversity
forests
insects
pests
trees