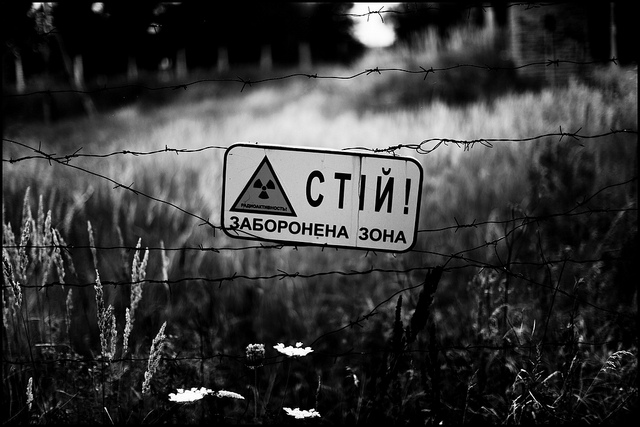 A sign warning of radiation from the explosion at Chernobyl. Photo by Zoriah, used under Creative Commons licensing.
Chernobyl's explosion in 1986 was the largest nuclear accident ever. In terms of radiation release, it exceeded Hiroshima by a long shot. And although the hulking ruin continues to threaten today, still hot under its cement and lead cap, nature is reclaiming what was once hers—before humans stripped her forests; before they hunted, plowed, and planted; and before they built four nuclear reactors. In the days following the disaster at Chernobyl, radioactive elements rained down upon towns, forests, and distant landscapes, settling on rooftops, leaves, soil, rivers, and lakes. These unstable elements spewed out high-energy atomic bits that rip apart the molecules of life—killing cells and busting apart strands of DNA. Some will continue discharging these lethal bits for decades; others for centuries. Even in the days before Google, it wasn’t hard to imagine the utter destruction that enveloped the region as radioactive iodine, strontium, cesium, and plutonium settled into lakes and forests and the bones and bodies of those unlucky enough to live within the disaster’s influence. I was a young graduate student at that time, immersed in the world of cancer-causing chemicals that warped, twisted, and snipped apart bits of DNA, and it wasn’t hard for me to imagine the inevitable menagerie of mutant fish, fowl, and furred creatures that would surely haunt the land for decades to come. Within days of the accident, tens of thousands of acres of pine forest—subsequently known as the red forest—died. And yet, amidst the destruction and despite the radioactivity that lingers across the landscape today, the abandoned towns, fields, and forests are not inhabited by populations of twisted mutants. Instead, depending on whom you read, at least some of Nature’s children are thriving. For nearly twenty years, Texas Tech scientists Ronald Chesser and Robert Baker have studied life in the Chernobyl Exclusion Zone. Originally a 30-kilometer radius from the explosion’s ground zero, the zone now covers more than 2000 square kilometers, including some of the most contaminated real estate in the world. The pair recalled visiting the site for the first time, eight years after the blast, writing, “We were completely taken aback by what we saw…” Amidst once-unimaginable destruction was life, and plenty of it. “The ‘Exclusion Zone’ has effectively become a preserve.” 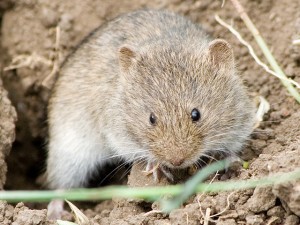