Skip to main content
Home   /   Blog   /   President Obama Delivers Historic Speech on Climate Change:...
The President’s groundbreaking speech on climate change was as an historic step to follow up on his message to Congress that if they don’t take action on climate change, he will. But will he now follow suit by taking even bolder actions on forests? 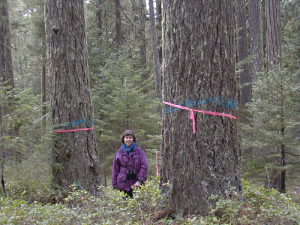 Old-growth temperate rainforest in southwest Oregon with large carbon-storing trees marked for logging (photo credit: F. Eatherington, Cascadia Wildlands)
Following the hottest year on record, and $110 billion in storm related and other climate chaos damages, the President is reading the climate change tea-leaves and taking advantage of how the public is gradually warming up to weird weather being the new norm. His milestone “Climate Action Plan” includes fuel-efficiency standards for heavy trucks, tougher rules on new and existing power plants, efficiencies in the energy grid, and a menu of other climate change mitigation and adaptation measures that will set the stage for new policies on climate change for years to come. But where do forests fit in the mix of climate change remedies? The President’s announcement includes “preserving forests in their role to mitigate climate change.” Specifically, he aptly notes that “conservation and sustainable management can help to ensure our forests continue to remove carbon from the atmosphere” and, in recognizing this, he is directing federal agencies to “store more carbon” in forests. 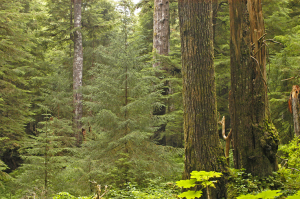 Alaska's coastal rainforests store the carbon dioxide equivalent of 90 times the state's emissions. Coastal rainforests from Alaska to California should be protected as part of the nation's forest carbon trust (photo credit: J. Schoen)
From the California coastal redwoods to Alaska’s Tongass, rainforests are some of the most carbon dense forests in the world. Alaska’s rainforests store the carbon dioxide equivalent of 90 times the state’s greenhouse gas pollutants while Oregon’s coastal rainforests store some 38 times the state’s emissions. Carbon is stored in massive trees, dense foliage, and productive soils but released as carbon dioxide pollution when these forests are logged. To make sure these forests are optimized for their carbon and other ecosystem benefits, the President needs to now follow with an executive order that designates a national forest carbon trust on federal lands, where mature coastal rainforests are then protected in perpetuity for their carbon, wildlife, and clean water benefits. Many of these forests are threatened by congressional proposals to turn them into “timber trusts” as is currently the case in Oregon and Alaska, and by federal policies that still allow them to be clearcut on federal lands. What needs to happen next is for the President to tell the Secretary’s of Agriculture and Interior that he wants those forests protected in a carbon trust as part of his climate action plan. These public forests are some of world’s last intact temperate rainforests. They need to be protected while also transitioning the BLM and Forest Service into a restoration economy by restoring forests degraded by decades of carbon-polluting mismanagement. The President could once again get the jump on ill-informed congressional measures but only if he acts on protecting America’s rainforests in a national carbon-forest trust.
climate
forests
government
rainforests