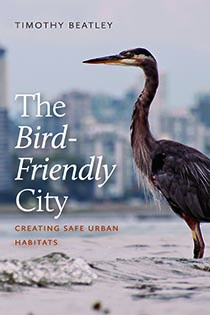 How does a bird experience a city? A backyard? A park? As the world has become more urban, noisier from increased traffic, and brighter from streetlights and office buildings, it has also become more dangerous for countless species of birds. Warblers become disoriented by nighttime lights and collide with buildings. Ground-feeding sparrows fall prey to feral cats. Hawks and other birds-of-prey are sickened by rat poison. These name just a few of the myriad hazards. How do our cities need to change in order to reduce the threats, often created unintentionally, that have resulted in nearly three billion birds lost in North America alone since the 1970s?

In The Bird-Friendly City, Timothy Beatley, a longtime advocate for intertwining the built and natural environments, takes readers on a global tour of cities that are reinventing the status quo with birds in mind. Efforts span a fascinating breadth of approaches: public education, urban planning and design, habitat restoration, architecture, art, civil disobedience, and more. Beatley shares empowering examples, including: advocates for “catios,” enclosed outdoor spaces that allow cats to enjoy backyards without being able to catch birds; a public relations campaign for vultures; and innovations in building design that balance aesthetics with preventing bird strikes. Through these changes and the others Beatley describes, it is possible to make our urban environments more welcoming to many bird species.

Readers will come away motivated to implement and advocate for bird-friendly changes, with inspiring examples to draw from. Whether birds are migrating and need a temporary shelter or are taking up permanent residence in a backyard, when the environment is safer for birds, humans are happier as well.

Preface: Design of The Bird-Friendly City

Chapter 1: The Benefits of Birds in a World Shaped by Humans
Chapter 2: Birds in a Changing World of Cities
Chapter 3: Protecting the Birds around Us: How Cities like Portland Are Nurturing Unlikely Alliances of Bird and Cat Lovers
Chapter 4: Returning Home: Inspiring Work from London to Pittsburgh to Make Space for Migrating Birds
Chapter 5: Replacing Habitats Lost: the Story of the Burrowing Owls of Phoenix and Efforts at Urban Relocation
Chapter 6:  Vertical Bird City: Singapore, Hornbills, and Beyond
Chapter 7: Bird Appreciation
Chapter 8: Design for Safe Passage: Cities Like San Francisco Lead the Way with Bird-Safe Buildings
Chapter 9:  Birds in Ravine City: Toronto’s Pioneering Work to Build Awareness and Design a Habitat City
Chapter 10: Black Cockatoo Rising: The Struggle To Save Birds and Bush From a Proposed Highway
Chapter 11: Birdicity: What Makes for a Deeply Bird-Friendly City and How Do We Measure It?
Chapter 12: Cultivating a Bird-Caring Citizenry