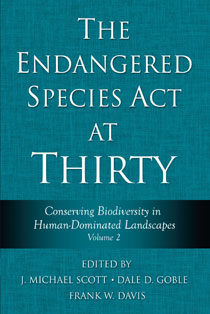 The Endangered Species Act at Thirty

A companion volume to The Endangered Species Act at Thirty: Renewing the Conservation Promise, this book examines the key policy tools available for protecting biodiversity in the United States by revisiting some basic questions in conservation: What are we trying to protect and why? What are the limits of species-based conservation? Can we develop new conservation strategies that are more ecologically and economically viable than past approaches?

"Here, at last, thoughtful writers—lawyers, scientists, economists, public officials, and nonprofit leaders—move beyond anecdotes, posturing, and incomplete reporting to delve respectfully into the needs and rights of private landowners while reaffirming the many successes of the Endangered Species Act. Journalists and legislators should read this book cover to cover."
Steve McCormick, President and CEO, The Nature Conservancy

"After thirty years, the Endangered Species Act has restored species as charismatic as the bald eagle and prevented extinctions and ecosystem loss. This is the book that lays out the act's many successes, how it might be improved, and all the necessary details in between."
Stuart Pimm, Doris Duke Professor of Conservation Ecology, Duke University

"This volume offers constructive approaches to promote effective recovery of species at risk of extinction. Particularly heartening are those that reconcile economic needs of the working landscape—farms, ranches, and timberland—with biological imperatives of endangered wildlife and plants. Our collective experience under the Endangered Species Act has dispelled any vestigial notion that humans and imperiled species can live and flourish apart; the reader will find thought-provoking guidance for pursuit of an essential interspecies fair-housing policy."
Steven P. Quarles, natural resources and environmental law chair, Crowell & Moring LLP

"Few environmental laws anywhere have been as successful, or as contested, as the Endangered Species Act in defending species on the brink of extinction. If it is to be strengthened or even survive, everyone involved—conservationists, politicians, and advocates for development—must understand its real successes and failures through its first thirty years."
Steve Trombulak, President of the Society for Conservation Biology, North American Section

PART I. What Have We Protected?
Chapter 1. Introduction
Chapter 2. By the Numbers
Chapter 3. Marine Species
Chapter 4. The Class of '67
Chapter 5. The Listing Record
Chapter 6. Congressional Politics