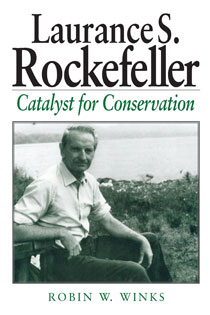 Despite his status as a scion of one of the wealthiest and most famous families in the United States and an enormously successful businessman in his own right, Laurance S. Rockefeller is unknown to all but a small circle of Americans. Yet while he has been neither Vice President nor Governor nor chairman of the world's largest bank, his contribution to society has been at least as great as that of his more famous brothers.

In Laurance S. Rockefeller: Catalyst for Conservation, noted historian Robin W. Winks brings Laurance to the forefront, offering an intimate look at his life and accomplishments. While Rockefeller has played a vital role in the business world as one of the most astute venture capitalists of our time -- providing seed money for, among other endeavors, Eastern Airlines, Intel Corporation, and Apple Computers -- his driving passion throughout his life has been the environment. In addition to the millions of dollars he has donated and the numerous conservation organizations he has helped to found, he served under five consecutive presidents in environmental advisory capacities.

Perhaps most significantly, Rockefeller served under Presidents Eisenhower and Kennedy as chairman of the Outdoor Recreation Resources Review Commission (ORRRC), brilliantly orchestrating an assessment of the recreation and conservation needs and wants of the American people and the policies and programs required to meet those needs. The reports issued by the Commission represent a groundbreaking achievement that laid the framework for nearly all significant environmental legislation of the following three decades.

Winks uses a combination of historical insight and extensive access to Rockefeller and government archives to present the first in-depth examination of Laurance Rockefeller's life and work. His deftly argued and gracefully written volume explains and explores Rockefeller's role in shaping the transition from traditional land conservation to a more inclusive environmentalism. It should compel broader interpretation of the history of environmental protection, and is essential reading for anyone concerned with the past or future of conservation in America.