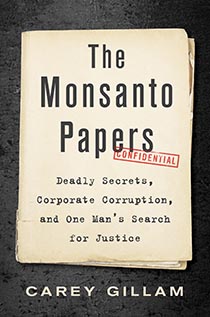 Deadly Secrets, Corporate Corruption, and One Man’s Search for Justice

Lee Johnson was a man with simple dreams. All he wanted was a steady job and a nice home for his wife and children, something better than the hard life he knew growing up. He never imagined that he would become the face of a David-and-Goliath showdown against one of the world’s most powerful corporate giants. But a workplace accident left Lee doused in a toxic chemical and facing a deadly cancer that turned his life upside down. In 2018, the world watched as Lee was thrust to the forefront of one the most dramatic legal battles in recent history.

The Monsanto Papers is the inside story of Lee Johnson’s landmark lawsuit against Monsanto. For Lee, the case was a race against the clock, with doctors predicting he wouldn’t survive long enough to take the witness stand. For the eclectic band of young, ambitious lawyers representing him, it was a matter of professional pride and personal risk, with millions of dollars and hard-earned reputations on the line. For the public at large, the lawsuit presented a question of corporate accountability. With enough money and influence, could a company endanger its customers, hide evidence, manipulate regulators, and get away with it all—for decades?

Readers will be astounded by the depth of corruption uncovered, captivated by the shocking twists, and moved by Lee’s quiet determination to see justice served. With gripping narrative force that reads like fiction, The Monsanto Papers takes readers behind the scenes of a grueling legal battle, pulling back the curtain on the frailties of the American court system and the lengths to which lawyers will go to fight corporate wrongdoing.

"The author builds a convincing case that Monsanto was more interested in protecting the reputation of its cash cow than heeding scientific evidence of its dangerous properties. Gillam is especially good at rendering the complex dynamics of the legal personalities, which adds a further humanizing dimension to Johnson’s story…An authoritative takedown of a corporation that evidently cares little for public health."
Kirkus Reviews

"The Monsanto Papers is essential reading for anyone who wants to understand the dangers of glyphosate to human health and the corrupt system of corporate and political influence that enabled Monsanto to sell its toxic weed killer for decades….fascinating cast… gripping tale, and Gillam, a master storyteller and investigative reporter, brings them to life in vivid detail."
Sierra

"Gillam narrates an of-the-moment reckoning with a major corporation whose products have been marketed as safe since the 1970s. As an examination of both corporate malfeasance and legal maneuvering in torts cases, Gillam's book personifies the need for consumer protections and safety."
Booklist

"A fast-paced, engaging account of how Monsanto and Bayer’s fortunes changed dramatically in such a short span of time...a gripping read that provides an easy-to-follow explanation of how this litigation unfolded, how the jurors reached their verdict and why Bayer appears to be, in effect, throwing up a white flag now."
St. Louis Post-Dispatch

"The Monsanto Papers blends science and human tragedy with courtroom drama in the style of John Grisham. It is a story of corporate malfeasance on a grand scale – a chilling revelation of the chemical industry’s greed, arrogance, and reckless disregard for human life and the health of our planet. It is a must read."
Philip J. Landrigan, MD, Director, Program for Global Public Health and the Common Good, Boston College

"A powerful story, well told, and a remarkable work of investigative journalism. Carey Gillam has written a compelling book from beginning to end, about one of the most important legal battles of our time."
Lukas Reiter, TV executive and writer for "The Blacklist," "The Practice," and "Boston Legal"

"A great read, a page turner. I was totally engrossed by the deception, distortions, and lack of decency of the company."
Linda S. Birnbaum, Former Director, National Institute of Environmental Health Sciences and National Toxicology Program, and Scholar in Residence, Duke University

"A powerful book that sheds light on Monsanto and others who have been untouchable for so long!"
John Boyd Jr., Founder and President, National Black Farmers Association

A Note on Sources
Acknowledgments
About the Author
Index

The Monsanto Papers: Collaborative on Health and the Environment

Carey Gillam's first book - Whitewash - The Story of a Weed Killer, Cancer and the Corruption of Science -  explored the scientific research showing human and environmental health harms associated with glyphosate, the world's most widely used herbicide, and the decades of deceptive tactics by Monsanto to cover up the harms of glyphosate products, such as Roundup. During this webinar Ms. Gillam will discuss her new book, The Monsanto Papers, a very tragic human story about the results of that deception. The Monsanto Papers takes readers into the personal and painful struggle of Lee Johnson—an average middle-aged husband and father—as he sees his life unravel due to his terminal cancer diagnosis and tries to prepare his wife and two children for his death. The book also explores the fascinating—and controversial—tactics of the mass tort attorneys who decide to help Lee, and thousands of other cancer victims like him, take Monsanto to court. Lee became the first person in the world to go to trial against Monsanto and to prove that the company’s 40-year-old, wildly popular weed killer causes a type of cancer called non-Hodgkin lymphoma. Though many scientists for years had pointed to evidence tying Monsanto’s herbicide to cancer, the company had always been successful in convincing regulators and customers that such evidence was invalid. Few onlookers thought Lee and his lawyers could actually win at trial against the powerful and highly influential Monsanto. But people around the world wanted to see the evidence, and the case ended up being covered by media from around the world. Lee's victory was instrumental in leading Monsanto's owner Bayer AG to agree to pay $11 billion to settle the mass tort litigation. Ms. Gillam will present details of the deception by Monsanto, and how the lawyers found and used those data.

This webinar is one in a monthly series sponsored by the Collaborative on Health and the Environment’s EDC Strategies Partnership. The CHE EDC Strategies Partnership is chaired by Sharyle Patton (Commonweal Biomonitoring Resource Center), Jerry Heindel (Commonweal HEEDS, Healthy Environment and Endocrine Disruptor Strategies), Genon Jensen (HEAL), Sarah Howard (DiabetesandEnvironment.org), and Hannah Donart (Collaborative on Health and the Environment, a Commonweal program). To see a full list of past calls and webinars related to EDCs and listen to or view recordings, please visit our partnership page.

This webinar will be moderated by Jerry Heindel, PhD, founder and director of Commonweal's Healthy Environment and Endocrine Disruptor Strategies (HEEDS). It will last for 45 minutes and will be recorded for our call and webinar archive.

The Monsanto Papers: A Conversation about Cancer and Accountability

Lee Johnson was just an average middle-aged husband and father until a terminal cancer diagnosis after a large exposure to the weed killer Roundup thrust him into a global debate over the safety of Monsanto’s popular product. Lee became the first person to take Monsanto to court and prove that Monsanto’s 40-year-old Roundup products cause a type of cancer called non-Hodgkin lymphoma.

In this webinar, journalist and The Monsanto Papers author Carey Gillam will discuss the many unexpected twists and turns that went on behind the scenes of the historic case that helped force Monsanto owner Bayer AG into an $11 billion settlement. Lee Johnson will speak about his battle both to fight cancer and the giant chemical company. Attorney Michael Miller will discuss how the case was fought, and eventually won. Mackenzie Feldman will moderate our discussion and talk about how her organization, Herbicide-Free Campus, works to eliminate herbicides from college campuses across the U.S.

This webinar is co-hosted by Island Press and Herbicide-Free Campus.

Join The Non-GMO Project for a Facebook Live presentation on The Monsanto Papers: Deadly Secrets, Corporate Corruption, and One Man’s Search for Justice by author and investigative journalist Carey Gillam. Enter to win a copy of the book while you’re there!

The Monsanto Papers is the story of Lee Johnson’s landmark lawsuit against Monsanto, the first in the world proving the company’s popular weed killer causes cancer. Told he has 18 months left to live, Lee teams with an unorthodox group of lawyers to try to hold Monsanto accountable, leading to one of the most dramatic legal battles in recent history. Monsanto’s reputation of regulatory and scientific manipulation with respect to chemicals, as well as genetically engineered crops, is laid bare in this riveting read.

Carey will give a presentation on the book and take questions from the audience.

"The author builds a convincing case that Monsanto was more interested in protecting the reputation of its cash cow than heeding scientific evidence of its dangerous properties. Gillam is especially good at rendering the complex dynamics of the legal personalities, which adds a further humanizing dimension to Johnson’s story…An authoritative takedown of a corporation that evidently cares little for public health."
Kirkus

"Gillam narrates an of-the-moment reckoning with a major corporation whose products have been marketed as safe since the 1970s. As an examination of both corporate malfeasance and legal maneuvering in torts cases, Gillam's book personifies the need for consumer protections and safety."
Booklist

Download Chapter 1: Getting Dirty here or read it below.