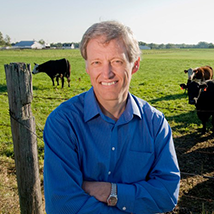 Kevin Walker is a professor at Michigan State University. Originally recruited by the U.S. Department of Agriculture, Walker directed a center focused on emerging issues affecting animal agriculture. He later became a Fellow with the Kellogg National Leadership Program and launched the Executive Leadership in Food Safety initiative where he proposed and developed a flagship training course with the World Trade Organization. He has also served on two Institute of Medicine National Research Council committees within the National Academies.

Our food system’s reckoning with nature is coming

Today's relationship to food banishes nature and the environment to the periphery of how we live, instead of at the center.

A Changing Climate Means A Changing Society. The Island Press Urban Resilience Project, Supported By The Kresge Foundation And The JPB Foundation, Is Committed To A Greener, Fairer Future.​ This Article Was Originally Published June 5, 2019 in Environmental Health News.

On a pleasant spring afternoon nearly five decades ago, I accompanied my father as he walked through our peach and cherry orchards near the Wasatch mountains of Utah.

The bright colors of pastel blossoms in full display did little to ease the anxiety in his face. The cold and snow of winter had given way to warming temperatures announcing an early spring. As swelling tree buds transformed into blossoms, they became vulnerable to freezing temperatures when colder weather returned.

The recent hard spring frost worried him. The reckoning about to happen was unavoidable.

As we walked between rows of trees, he plucked random blossoms for further inspection. Peeling back the petals he looked for the tiny ovary nestled at the flower's base. A still green color brought a sigh of relief. A brown or black color foretold the loss of fruit.

Experiences like these taught me no matter how hard we worked as farmers, food availability always comes down to nature and the environment.

Such memories are never far from the surface when I see images of farmland and farm equipment submerged under water, stranded cattle with no place to go and nothing to eat, or fires raining destruction across vast landscapes.

Farmers today are having to reckon with the unwanted consequences of a warming planet.

From global records first kept in 1850, 17 of the 18 hottest years happened after 2000. In the U.S. alone, since 1980, there have been 241 extreme climatic events, each exceeding $1 billion in losses. In the past three years, the average number of billion-dollar losses has more than doubled the long-term trend.

Severe flooding in the Midwest, where much of the nation's grains and meat animals are raised; intense drought followed by fires then torrential rains in California, the country's number one agricultural state; a record-challenging tornado season — all serve notice that the new normal is anything but normal.

After each event, the reckoning always follows.

Having to reconcile availability of food with nature and the environment is as old as farming itself. No longer content to roam and live from what they could hunt and gather, our ancestors devised ways to stay in one place, alter their surroundings, and boost the supply of food.

By 1804, more than two million years since humans first arrived on the scene, the one billion population threshold was crossed. A mere 123 years later, the population doubled, then doubled again within half a century. Adding the latest one billion people took less than 13 years.

Behind the meteoric rise in population growth and prosperity was human ingenuity that ratcheted up levels of food. Yet the unprecedented abundance of food—which Americans now take for granted—never came with guarantees as to how long it would continue.

In a presentation to health promoters and nutritionists last month, I asked: "Where does food really come from?"

Their choices were: (a) supermarkets and restaurants; (b) 'free' markets; (c) farmers; (d) all of the above; or (e) none of the above. More than eight in 10 selected an answer between options (a) through (d).

Their answers, which reflect the domination of the modern food system in the way we live and relate to food, were not unexpected. America's latest connection to food had taken hold in less than two full-lifetimes.

Today, all we need to know about food is the location of the nearest supermarket or restaurant. All we need to do is bring money.

Societal confidence in our ability to pump out food nonstop has made it easy to avoid reconciling our self-made food system with nature and the environment.

Patenting processes of nature, limiting the diversity of other species, or saturating the environment with chemicals and concentrated animal waste are examples of outcomes we haven't accounted for.

In the latest episode in our series of Urban Resilience Project (URP) podcasts in partnership with Infinite Earth Radio, host Mike Hancox speaks with Kevin Walker about The Grand Food Bargain, his...

In the latest episode in our series of Urban Resilience Project (URP) podcasts in partnership with Infinite Earth Radio, host Mike Hancox speaks with Kevin Walker about The Grand Food Bargain, his new book that reveals the true costs of our seemingly cheap and convenient food system.

Kevin Walker Webinar with HERO on The Grand Food Bargain

Two full lifetimes ago consuming more calories was always welcome, taste was secondary, and having enough food defined everyday life. Nowadays, the opposite holds true: our society is awash in calories and individuals expect their food to satisfy...

Two full lifetimes ago consuming more calories was always welcome, taste was secondary, and having enough food defined everyday life. Nowadays, the opposite holds true: our society is awash in calories and individuals expect their food to satisfy personal tastes and lifestyle preferences. Finding ways to turn out more food created new possibilities and made living easier. Yet, while we have been busy changing food, food has been changing us in unexpected and unforeseen ways.

The modern food system relies on an illusion. It depends on endless abundance, but the planet has its limits. So too does a healthcare system that must absorb rising rates of diabetes and obesity. Shifting our mindset is essential, and it starts with remembering that what we eat affects the wider world. If each of us decides that bigger isn’t always better, we can renegotiate the grand food bargain, one individual decision at a time.

Kevin D. Walker grew up farming and has seen almost every facet of agriculture firsthand: working in agribusiness at the US Department of Agriculture, overseas with international nonprofits, and as a professor at Michigan State University. He has served on committees with the National Academies Institute of Medicine and National Research Council and as a consultant to foreign governments and the World Trade Organization. Dr. Walker’s book, The Grand Food Bargain: and the Mindless Drive for More, was released in March 2019.

To watch the video you'll need to "register" with GoToWebinar, then you'll recieve access to the recording.