Skip to main content
Home   /   Blog   /   Correlation, Causation, and the Bravery of Young...
Andy Revkin, who writes the dot Earth blog for the New York Times posted an article on Facebook which describes an apparent link between natural gas “fracking” and low birth weights. Revkin did preface the post by acknowledging that the study discussed in the article wasn’t peer reviewed, but a number of critics immediately posted comments questioning the science, Revkin’s judgment, the environmental movement, and (for good measure) climate scientists. Two points are relevant here. First, the study was conducted by a graduate student, Elaine Hill of Cornell University, and she wasn’t waiting for the peer review process to grind its way through her study before making her findings public. Academic scientists may wring their hands over this, but it reflects a growing trend in science where young scientists are increasingly interested in seeing that their work has an immediate impact on society. Aníbal Pauchard and I argue in Observation and Ecology that this desire in young scientists, which we think is driven by the urgency of today’s environmental challenges, is causing bottom up shifts in how science is being conducted and shared. Nonetheless, there is a danger that flaws in Ms. Hill’s methodologies, mistakes in her analysis, or other errors might emerge in the peer review. Some commentators on the article noted how much this puts her academic career at risk.  Others commended her for her bravery. I tend to side with the latter group. If she made mistakes, the truth will come out in peer review, and she will suffer some damage, as will the scientific community at large, just as occurred with mistakes in the IPCC report. I don’t think this kind of damage needs to be lasting to environmental science as long as scientists take ownership of this self-correcting aspect of science by pointing out to critics that when mistakes are found in past scientific conclusions, this is a sign of strength in the scientific process, not weakness. On the other hand, if Ms. Hill is correct, serious and lasting damage to human lives and society is being generated by the rapidly growing fracking industry, and waiting in silence for the full peer review may institutionalize this damage in terms of regulations drawn up in ignorance of the impacts. For her part, Ms. Hill seems to have put the career risks into perspective: “I couldn’t possibly value my career over [the future generation’s] well-being,” she told the reporter. Second, the findings were correlational, and boy did Revkin’s critics on Facebook jump on that. The first comment of the day confidently announced, “As any competent scientist knows, correlation does not imply causation.” Scientists for years have been accepting the "correlation does not imply causation" argument with absolute faith. It’s become the central dogma of scientific criticism. They reflexively shout it out at seminars and any time they see a correlation. No doubt, correlations can be wildly misleading and can even lead to embarrassment, as this amusing exchange of figures published in Science that we reprinted in Observation and Ecology shows: 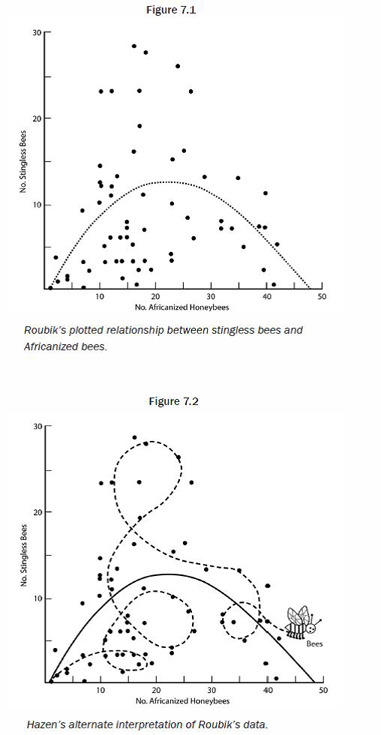 Nonetheless, there is zero absolute truth that correlation does not imply causation. In fact, when people drag out this old canard, I find myself snapping back, “Yeah? Well tell that to the dinosaurs!”  After all, science’s best theory on what caused the extinction of the dinosaurs is a brilliant layer cake of correlations assembled by Nobel laureate physicist Luis Alvarez and his geologist son Luis which shows through fossil evidence, geomorphology, geology, and atmospheric chemistry that the K-T extinction was likely caused by a large extra-terrestrial impact.  Remember at the time of this paper, the authors didn’t even have the “smoking gun” of an actual impact crater—that was only found 10 years later, using advanced observational technology, buried deep beneath the Yucatan peninsula. Of course, this all occurred in paleoscience, where it’s impossible to replicate controlled experimental trials.  But even in sciences like ecology that deal with the present day and have proudly bought into the “strong inference” mode of doing experimental science, correlational work is more powerful and relevant than ever before.  For example, over 90% of the first batch of studies that showed ecosystem responses to climate change were correlational in nature. With our much better abilities to assimilate much huger data sets than at any other point in history, the reflexive use of anti-correlation arguments just needs to stop. But more than simply the process of how we do science is at stake here. Just as the chemical companies repeatedly belittled Rachel Carson’s attribution of bird deaths to DDT as “correlational”, and tobacco companies repeatedly shielded themselves from culpability by dismissing the link between cigarettes and cancer as “correlational”, so too will today’s natural gas gold-rushers use the worn out “correlation does not imply causation” line to delay meaningful regulation and besmirch the reputations of brave young scientists like Elaine Hill.
science