Skip to main content
Home   /   Blog   /   Human Impacts on Natural Systems
As a conservation biologist, I study the ecological effects of wolves on food webs, focusing on their primary prey (elk) and the foods their prey eat (aspens). My work takes place in Waterton Lakes National Park, Alberta, which has many bears in it. Doing wolf research provides essential lessons about the web of life and coexisting with bears. 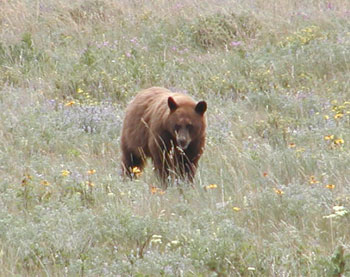 Bears are considered a “generalist” species, which means that a wide range of habitat and food meets their needs. While they tend to be patient with humans, food issues can put humans in conflict with bears. Which is exactly what happened two months down the line from a series of seven late-spring snowstorms in Waterton in 2010—a force of nature, right? Well, yes, and no. While the unseasonable snow was undoubtedly a force of nature, this disturbance had an anthropogenic aspect. Human use of natural resources—timber harvest and fossil fuel combustion—increase atmospheric carbon dioxide, causing global heat to rise resulting in weather disruptions. The Waterton storms delayed berry ripening by over one month. While the grizzlies had managed well in the interim by eating roots, shoots, and insects, they had become distinctly out of sorts upon discovering that their favorite berries were unavailable when they wanted them. I went to Waterton in late August to measure the aspens in a fire area in the Stoney Flats—a large prairie patch that is prime elk winter habitat. Stoney Flats lay three miles up the Wishbone Trail. Bears favored this flat, shoestring route hedged by aspens and berry-laden shrubs, as evidenced by abundant bear tracks and dinner-plate-sized purple scats. Two weeks before my arrival, a grizzly had bluff-charged a friend photographing mountain goats in one of my study sites, stopping short of physical contact. That summer six bluff-charge incidents had occurred in the park. I hoped that now that the berries were finally ripe, the bears would be so busy eating them that they would ignore us. My five-person aspen survey crew was configured in a “sandwich” formation—those with the most bear experience in the front and rear, everyone else in the middle where they would be best protected. At the end of our fifth day, we were leaving the area moving briskly, talking loudly, when about one mile from trail head, we heard a heavy thud on the path behind us. The Stoney Flats grizzly began to follow us, about 20 feet away. I kept our group moving. We looked over our shoulders as he approached, head low, hackles up, jaws clacking, hyperventilating and salivating, dark eyes like coals smoldering into ours. In an even voice, I instructed everyone to take out their bear spray. He closed the gap between us to ten feet. We kept moving, not breaking our pace, and began to scold him like an unruly child. After about three minutes of this, the bear sat down sideways on the trail. He cocked his head and looked at us—a forlorn, utterly confused expression on his face. Clearly he wasn’t used to humans reacting to him this way, so he stayed put. We continued on our way, and I radioed park dispatch. We returned to finish our work three days later, but never saw the bear again. Climate change driven by human over-consumption of resources helped trigger the late-season snowstorms. The resulting disruption to the bears’ food supply caused them to take out their frustration on humans. This provides a harrowing lesson as we move into a future that includes a burgeoning human population, escalating use of fossil fuels, accelerating global change and few solutions to these issues. The Stoney Flats grizzly was a messenger. If we open ourselves to the lessons he and his kin have to offer, perhaps we can learn to mend the damage.
biodiversity
climate change
wildlife