Skip to main content
Home   /   Blog   /   Hunting and the Land Ethic
I spent a dozen purple dusks and gilded dawns last December hunkered down in the hoarfrost in coulees, hiding in the rabbitbrush and sage during a late-season Colorado elk hunt. In an area with too many elk and not enough wolves, hunting cow elk provides a powerful conservation tool, because of its effectiveness in thinning herds. 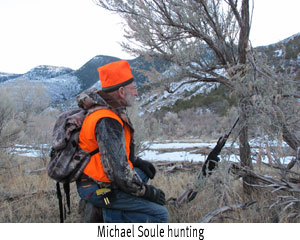 I had convened a science hunt on the High Lonesome Ranch in north-central Colorado. My hunting companions included Michael Soulé, who founded the science of conservation biology, and James Estes, a prominent marine ecologist who studies how predation by sea otters shapes ocean ecosystems. They were veteran hunters, while I was new to hunting. And so these men, who had long mentored me in my science, also mentored me in my first hunt. As a scientist I study how predation affects whole ecosystems, specifically how wolf predation affects their primary prey elk and how this relationship can influence food webs. Remove an apex predator, such as the wolf, and elk grow more abundant and bold, damaging their habitat by unsustainably consuming vegetation. Lacking apex predators, ecosystems can support fewer species, because the plants that create habitat for these species have been over browsed. Scientists, such as Aldo Leopold, recognized that apex predators benefit ecosystems in myriad ways by increasing the flow of energy. Yet, given human needs for land use and development, it isn’t possible to have wolves and other apex predators in as many places as they roamed several hundred years ago. In A Sand County Almanac Leopold articulated his land ethic philosophy. He wrote:

“A thing is right if it tends to preserve the integrity, stability, and beauty of the biotic community. It is wrong when it tends otherwise.”

In the 1940s, Leopold was among the first to suggest that hunting by humans, if done properly, can help emulate apex predation. This concept was highly controversial. A lifelong hunter, he had the temerity to suggest harvesting as the most effective way to control the deer population. His suggestion was poorly received by the public. Leopold died long before his ideas about hunting and the land ethic were accepted. Paradoxically, predation and the primal act of hunting are intrinsic elements of who we are as humans. These relationships are elucidated across the ages in Paleolithic petroglyphs of spear-wielding humans and saber-toothed tigers killing bison. As omnivores, our diet has historically consisted of wild foods harvested from the land, which includes the flesh of other animals. Today, as we strive to live more lightly on the earth, some of us are turning to hunting as both a way to create healthier ecosystems and nourish ourselves with natural, wholesome food. And so, I got my elk after six days of hard hunting. Afterward, I was filled with gratitude for the gift of this elk. She will feed my family and friends for one year. And her meat tastes of sagebrush and snowy mountains and clear streams and deep wildness—the sort of wildness Aldo Leopold wrote about in his land ethic essay.
conservation
food
land use

Congress Must Fish or Cut Bait on Marine Aquaculture
July 5, 2022
Healing from Trauma by Building for Health
June 29, 2022
Communities Must Step Back from the Coast as Sea Levels Rise
June 7, 2022