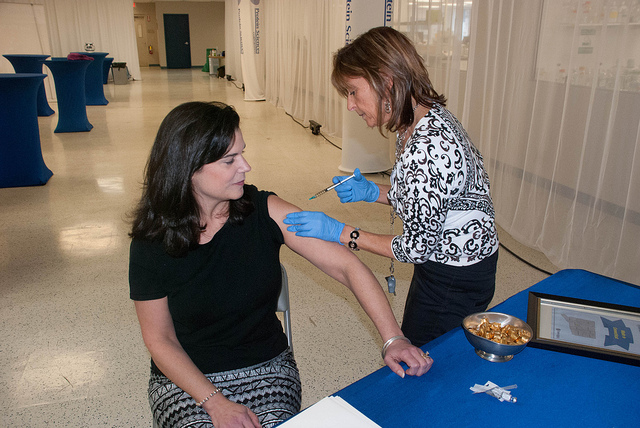 As flu season approaches each year, thousands line up to receive a vaccine—but many others don't. Photo by CT Senate Democrats, used under Creative Commons licensing.
Just the other day I sat politely as a graduate student at a local university gave her Toastmaster's speech about the dangers of influenza vaccine. When I critiqued her speech, I refrained from inserting my opinion of the content, sticking to her delivery even as a little round band-aid still clung to my upper arm—a reminder of the flu vaccine I'd received earlier that day. This year, I'd almost forgotten about the vaccine controversy, swamped out as it was by news of Ebola. To date, Ebola virus has infected well over 13,000 and killed nearly 5,000. Even as medical scientists scramble to develop a vaccine, I wonder if and when any controversy will arise over that. Perhaps, given the mortality rate, it won't. But flu vaccine is particularly tricky. Often the flu is an inconvenience to be weathered, a challenge that can be beaten back by a healthy immune system, so why, ask many (ranging from naturopaths to practitioners of Western medicine to my compatriots at the local coffee shop), tinker with nature? While the outcome may well be a week in bed for most, it certainly is not for all of us. Each year the flu kills tens of thousands of people worldwide. According to the Center for Disease Control in the United States that number ranges from 3,000 to 47,000 depending on the strain. In a really bad year, an epidemic year like 2009 when H1N1 raged, influenza virus can infect millions worldwide and kill hundreds of thousands. In 1918 influenza killed millions. And too often it is our most vulnerable who are at risk: the very young, the old, and those with asthma, weakened immune systems, and other preexisting conditions. 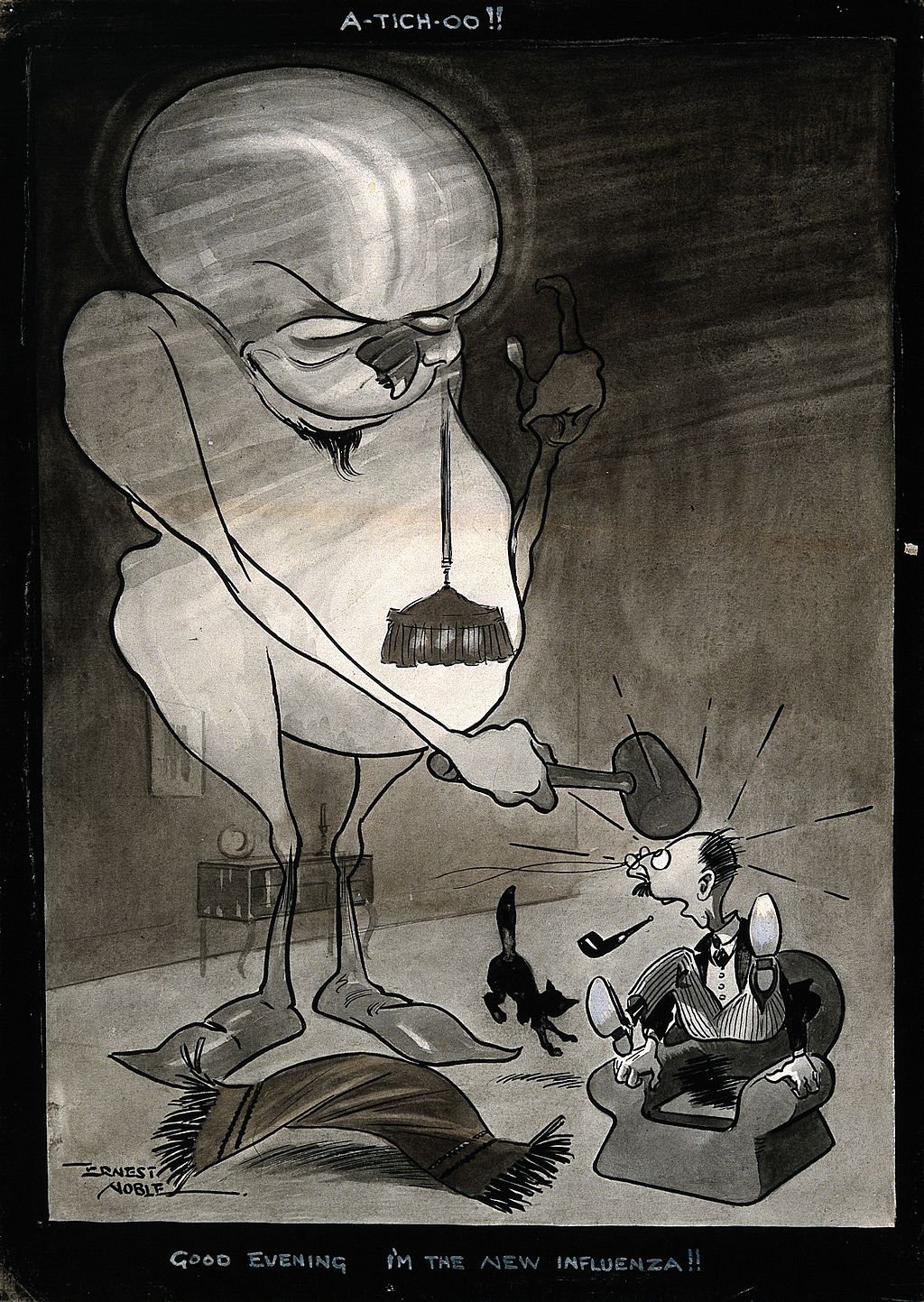 The flu of 1918 hits a man over the head. Photo from Wellcome Images, used under Creative Commons licensing.
Influenza vaccine is also a tough sell because unlike polio or measles, for which childhood vaccines provide long-lasting immunity, protection against influenza requires annual vaccination. This year's prevailing flu is different enough from last year's flu that old immunity often isn't up to the task of defeating the new virus. While making influenza vaccine is relatively easy, making a vaccine against the prevailing flu virus is a test of our ability to detect, identify, and predict the unpredictable—evolution. And influenza viruses have a knack for evolving—rapidly. Influenza is an RNA virus (viruses are categorized based on their genetic material as DNA viruses, like smallpox and chickenpox, or RNA viruses, like HIV and polio). Typically, when DNA is the template from which all other genetic information flows, there are proteins and enzymes involved in checking and correcting any mistakes that could lead to mutations, sort of like a spellchecker. But when RNA is the template for replication, as it is for flu, it is as if the time for spell checking has passed, and so mutations can slip by and accumulate more easily. As a consequence, the RNA mutation rate can be astoundingly high. In his Virology 101 blog, Columbia University professor of immunology and microbiology Vincent Racaniello writes that, given the mutation rate and size of the polio genome (also an RNA virus), an infected cell could theoretically produce 10,000 new viral mutants. That is (in theory) each new virus produced could carry one mutation. Although mutation rates vary from virus to virus, polio is one example—it is no wonder that RNA viruses like the flu are so highly evolvable. Even so, not all mutant flu viruses are equally hazardous to our health. Many will behave just like their parents, while others might be too disabled to replicate or to invade a new host—or they  may be so lethal that they kill their host before a body has the chance to sneeze out millions of viral progeny. Some mutations, however, enable the virus to carry on by evading the immune response, often rendering last year's vaccine so last year. Yet, despite the potential gloom-and-doom scenarios and influenza’s incredible capacity for rapid evolution, we survive. We have, as a matter of course, co-evolved to live with viruses, and the battle has left its imprint upon both our immune system and viruses. Our immune system is extraordinary. Like a 3-D printer on steroids, it creates antibodies in response to trillions of novel antigens (which, by definition, are substances that elicit an immune response). But there is a flip side to this awesome protection. When our immune system is at work attacking a pathogen, whether a cold virus or salmonella bacterium, it imposes a powerful selection pressure on the invader. If we didn’t mount a response, there would be little if any naturally occurring selection (though we may not survive the ordeal). When the target of our response is influenza, the result is an evolutionary triumvirate: high rates of viral reproduction, lots of genetic variability, and a strong selective pressure. Rapid evolution is inevitable. So, if I catch the flu, it is possible that some of the influenza virus that I shed will have mutated. Should I pass this virus on to my kids, husband, or neighbor I will inadvertently contribute to this particular virus’s evolutionary history. As the infection gains traction in my husband or neighbor, the cycle repeats. This is called antigenic drift (antigen referring to the bits of virus protein that our immune system recognizes). Endless antigenic drift is the main reason why those of us who choose to do so line up each year for a new flu vaccine each year. It becomes the challenge of health organizations around the globe to monitor and predict the most prevalent mix of influenza viruses (more than one are circulating at any given time) that will be coming our way each season and pick three strains to target. But occasionally influenza makes a larger evolutionary jump: rather than the meandering antigenic drift, it takes on new genetic material from other influenza viruses (this is called antigenic shift). This is what happened with the 2009 H1N1 and why it caught many immune systems completely unprepared. 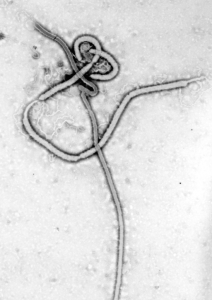 An Ebola virus. Photo by CDC/Dr. Frederick A. Murphy.
Ebola too, is an RNA virus, which means that it, like influenza, mutates relatively frequently. So how does this add to the Ebola Fear Factor? That seems to depend upon whom you read. Here is Michael Osterholm, Director of the University of Minnesota's Center for Infectious Disease Research and Policy, in an editorial for The New York Times: “If certain mutations occurred, it would mean that just breathing would put one at risk of contracting Ebola. Infections could spread quickly to every part of the globe, as the H1N1 influenza virus did in 2009, after its birth in Mexico.” But before we run for the hills, here is Racaniello's take: “The key phrase here is ‘certain mutations.’ We simply don’t know how many mutations, in which viral genes, would be necessary to enable airborne transmission of Ebola virus, or if such mutations would even be compatible with the ability of the virus to propagate.” Here is the point that Racaniello drives home: “We have been studying viruses for over 100 years, and we’ve never seen a human virus change the way it is transmitted.” If you don't believe Racaniello, here is Eric Lander, the head of the Broad Institute, a biomedical research facility run by Harvard and MIT, quoted in a recent article for the New Yorker: “That’s like asking the question ‘Can zebras become airborne?’” But the virus is evolving. And as more individuals are infected with Ebola, the virus has more opportunities to acquire small mutations: perhaps it will become more difficult to diagnose, or more difficult to treat, or  more, or less, virulent. But there is hope. We can use what we know about evolution to fend off future infections and treat existing ones. Vaccine makers are now targeting highly conserved regions on viruses like the flu to develop longer lasting and more broadly effective vaccines. Physicians and health care workers can help preserve the efficacy of new antiviral drugs by keeping evolution in mind as they treat patients so that treatments don't lose their usefulness. We are racing against the evolutionary clock. We can't stop time, but we can certainly work towards slowing the inevitable.
Ebola
evolution
health
diseases
science
vaccines
viruses
viruses