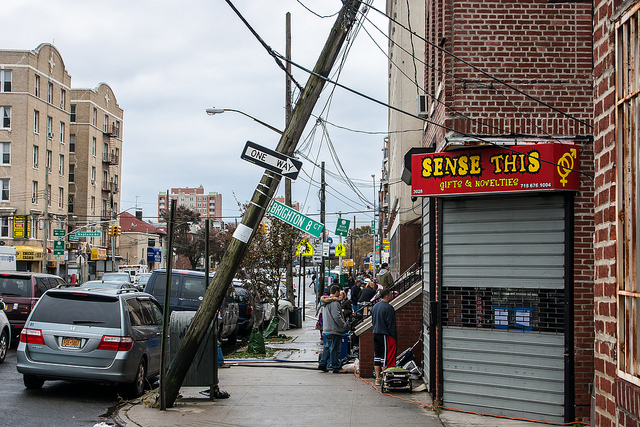 Power lines were among the many casualties of Superstorm Sandy. Photo by drpavloff, used under Creative Commons licensing.
Cross-posted from the Huffington Post with permission. This fall, Island Press released the Smart Power Anniversary Edition, allowing me to supplement the original text with forewords from industry leaders such as Jim Rogers, Daniel Esty, Daniel Dobbeni, and Lyndon Rive. These experts joined me in expressing amazement at the rapid changes taking place over the past few years: plunging solar costs, the shale gas revolution, the new EPA regulations for power plants, the need for energy system resiliency, and how growing interests in exploring new business models have set interest in utility transformation into overdrive. In his foreword, Daniel Dobbeni writes: "Often cited in the past as a model of long-term planning, the power sector nowadays is upside down. Fast and often uncoordinated transformations reshape each and every segment of the value chain. Long gone are the days when long term energy and environmental policies were determined without paying too much attention to competitiveness issues or potential 'black swan events.'" As we near the second anniversary of Hurricane Sandy, a storm whose magnitude may soon become the norm and not just a black swan, I am beginning to see energy resilience as one of the biggest new drivers in utility transformation. Resilience is quickly emerging as a driver important and complex enough to deserve its own chapter in Smart Power. All of us lived through Superstorm Sandy and quite a lot of other recent severe climate events. The U.S. had 11 events in 2012 with greater than $1 billion worth of damage, and in 2013 there were only nine of these billion dollar events. These climate events come with outages on an unprecedented scale, of which Superstorm Sandy was the poster child: eight million customers were without power, many for several weeks. Those events have prompted many to ask whether a different architecture of the grid, with greater use of distributed energy resources and smart grid technology would help in the response to those sorts of events. Those technologies and resources will help greatly, and should continue to grow, though I would caution against being too simplistic about it. Solar cells on your roof may be a good thing, but they won't necessarily prevent some very severe grid impacts. So, although it's not a simple topic, it's an important new driver for industry change. In lieu of my missing chapter, there are some truly notable sources on this topic I want to highlight. For those new to the topic or still learning how utilities view resilience planning, the National Association of Regulatory Utility Commissioners (NARUC) has prepared an excellent introduction: Resilience in Regulated Utilities. Some interesting examples of how regions and utilities are addressing resilience include New Jersey's Energy Resilience Bank, New York's Resiliency Plan, and Maryland's Grid Resiliency Task Force and Resiliency Through Microgrids Task Force. For those interested in the broader overlaps between resilience and sustainability, The Solutions Journal just released a special resilience-focused issue. The special edition included articles from The Center for Resilience at Ohio State, and a piece by Peter Evans and myself discussing "Resilience and Sustainable Infrastructure for Urban Energy Systems". Our article highlights the complexity of these issues and the need for urban energy systems to not only build resilient and sustainable infrastructure, but also develop systems intelligence and broad planning efforts—many of the elements of future utilities laid out in Smart Power. There is great momentum for change in the industry, and the new driver, resilience, will play a role in shaping utilities of the future in the coming years.
climate
climate change
energy
resilience

Peter Fox-Penner is the Director of the Institute for Sustainable Energy at Boston University and the author of Smart Power Anniversary Edition.