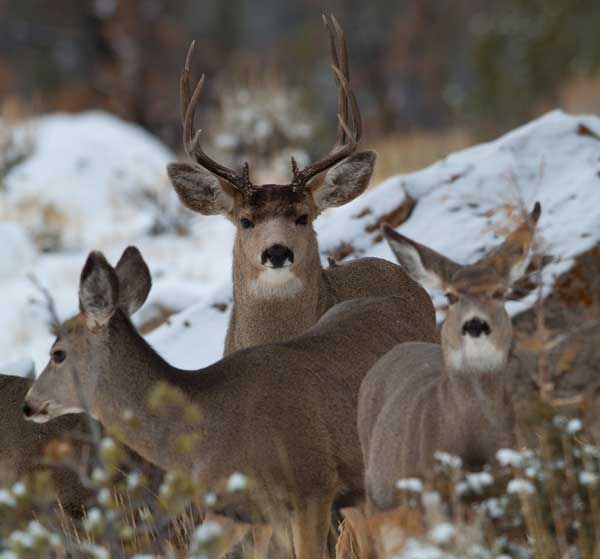 Mule deer at Torrey Creek Trailhead. Photo © Scott Copeland.
Reposted with permission from The Nature Conservancy's Cool Green Science blog. Post by Holly Copeland Scientists studying Greater sage grouse have recognized for years that these birds require large unfragmented landscapes to survive. Many have also argued that Greater sage grouse are an “umbrella” species – if you protect them, you can also protect many other kinds of wildlife…such as mule deer. But is that claim really true, at least for mule deer? That’s the focus of a new study in Ecosphere that I co-authored with other scientists and mule deer experts.

The Test Bed — A ‘Grand Experiment’ in Sage Grouse Conservation

With sage grouse populations in well-publicized decline, there is a grand experiment occurring in Wyoming aimed at conserving them. The experiment was launched in 2008 with by executive order of Wyoming’s governor — an order now referred to as the Wyoming “core area policy,” which limits development in key breeding areas for grouse. In addition to protections from the policy, federal, private and mitigation funds from oil and gas have also bolstered conservation easement activity specifically for sage grouse. Mule deer are also declining throughout Wyoming and the West and use sagebrush habitats to winter and migrate to their summer range. So, the natural question arising from this overlap is whether or not mule deer will benefit from grouse-related conservation activities. Understanding how single species conservation can benefit other species through “umbrella” based conservation is both a smart and practical form of conservation to work within the system that we have. To test this idea, Nature Conservancy scientists Amy Pocewicz and I joined forces with NRCS Sage Grouse Initiative scientist David Naugle and a team of mule deer experts at University of Wyoming and WEST, Inc consulting. (Read the full study, published this month in Ecosphere.)

A Doubling of Previously Existing Conservation for Mule Deer Habitats

We synthesized data from two main sources for our study area in the upper Green River Basin in western Wyoming: 1) mule deer GPS collar data from a pre-existing research study and 2) data representing conservation activities for grouse. Using this data, as well as data on thresholds for tolerance of mule deer to development (Sawyer et al. 2013), we were able to show that sage-grouse related conservation measures doubled previously existing conservation of mule deer habitats. 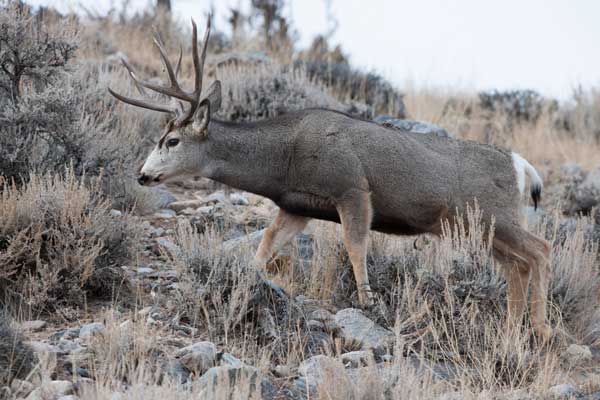 Mule deer buck at Torrey Creek Road. Photo © Scott Copeland.
We found that areas identified as core grouse habitat in this region overlap with winter range, stopover areas and migration corridors used by deer — and that grouse core-area provisions are generally sufficient to limit impacts on deer as well as grouse. Those provisions primarily include restrictions on surface disturbances for activities such as oil and gas drilling. We also identified current gaps in mule deer conservation in the same study area, providing a road map of conservation opportunities for land trusts and others working on the ground.

Current Policies: Necessary But Not Sufficient for Sage Grouse and Mule Deer?

There is a concern, though, that Wyoming’s core area policy will push development out of sage grouse core areas and increase impacts to migrating mule deer where their migration, stopovers, and winter habitats fall outside of sage grouse protections. Currently there is no formal statewide protection of mule deer migration corridors, which could be rectified through land management policy changes to reflect consideration of these areas. Recently, the state of Montana followed in Wyoming’s footsteps and enacted their own sage grouse core area policy with very similar restrictions. The core area policy was designed to protect sage grouse with what was known at the time about their sensitivity to development. Still, many in the scientific and conservation communities (including me) wonder if it will be enough to keep the populations from a long-term downward decline. 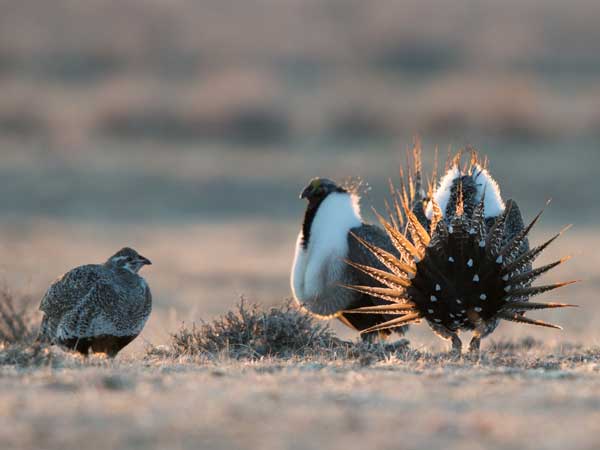 A sage grouse lek at Twin Creek. Photo © Scott Copeland.
Last year we published a study in PLOS One examining benefits of these policies for grouse in Wyoming, and found that these efforts will not likely halt, but will significantly stem declines. There are many nuances in the current conservation policy that depending on how faithfully it is carried out, could determine its long-term efficacy. Nonetheless, the policy represents a much needed step forward in reducing fragmentation of sagebrush. The Conservancy and partners, in a study funded through the Wyoming legislature, are also now engaged in an effort in Wyoming to establish baseline metrics of sagebrush habitat quality at the time the policy was enacted in 2008, and methods to reliably track conditions over time and tied back to population health. If we can confidently measure these trends, we will know whether these conservation actions are really working — or not. It’s a key step to evaluating conservation progress in the unfolding sage grouse story.