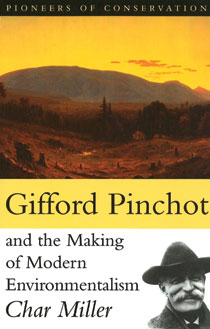 Gifford Pinchot and the Making of Modern Environmentalism

Gifford Pinchot is known primarily for his work as first chief of the U. S. Forest Service and for his argument that resources should be used to provide the "greatest good for the greatest number of people." But Pinchot was a more complicated figure than has generally been recognized, and more than half a century after his death, he continues to provoke controversy.

Gifford Pinchot and the Making of Modern Environmentalism, the first new biography in more than three decades, offers a fresh interpretation of the life and work of the famed conservationist and Progressive politician. In addition to considering Gifford Pinchot's role in the environmental movement, historian Char Miller sets forth an engaging description and analysis of the man -- his character, passions, and personality -- and the larger world through which he moved.

Char Miller begins by describing Pinchot's early years and the often overlooked influence of his family and their aspirations for him. He examines Gifford Pinchot's post-graduate education in France and his ensuing efforts in promoting the profession of forestry in the United States and in establishing and running the Forest Service. While Pinchot's twelve years as chief forester (1898-1910) are the ones most historians and biographers focus on, Char Miller also offers an extensive examination of Pinchot's post-federal career as head of The National Conservation Association and as two-term governor of Pennsylvania. In addition, he looks at Pinchot's marriage to feminist Cornelia Bryce and discusses her role in Pinchot's political radicalization throughout the 1920s and 1930s. An epilogue explores Gifford Pinchot's final years and writings.

Char Miller offers a provocative reconsideration of key events in Pinchot's life, including his relationship with friend and mentor John Muir and their famous disagreement over damming Hetch Hetchy Valley. The author brings together insights from cultural and social history and recently discovered primary sources to support a new interpretation of Pinchot -- whose activism not only helped define environmental politics in early twentieth century America but remains strikingly relevant today.

"...an absorbing, well-researched, and illuminating life of an American leader who now receives the full attention he deserves."
Michael Beschloss, Editor of "American Heritage Illustrated History of the Presidents"

"Char Miller's lively, insightful account of the life and world of American forester Gifford Pinchot fills a vitally important gap in environmental and conservation history. Anyone captivated by the issues and controversies surrounding the preservation and development of the nation's natural heritage should read this engaging, carefully researched biography."
Carolyn Merchant, University of California, Berkeley, author of "The Death of Nature"