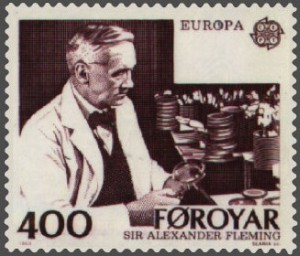 Alexander Fleming (pictured here on a stamp printed by the Faroe Islands) warned that pathogens would resist penicillin during his Nobel speech in 1945. Photo via Wikimedia Commons.
If you aren’t yet concerned about antibiotic resistance, you should be. With totally resistant TB and nearly resistant gonorrhea and certainly other incredibly resistant pathogens, the implications are clear: we are circling back toward the pre-antibiotic age. In today’s highly traveled and far more populated world, when infection can spread around the globe in a day—prevention and cure are more critical than ever. But it is not like we haven’t been warned before. Decades ago Nobel Prize winner Joshua Lederberg warned in and interview with Science magazine that “[w]e live in evolutionary competition with microbes…there is no guarantee that we will be the survivors.” Pathogens are evolving their way around the bacteria-busting properties antibiotics. Aside from preserving the efficacy of what we’ve got—we need new antibiotics with new ways of killing what ails us. At the outset of the twentieth century, laboratories relied on trial and error, testing one chemical after another. Today’s drug developers can comb through mounds of genetic data, seek out vulnerable targets, identify potentially effective new antibiotics and rapidly screen tens of thousands of chemical compounds. They know more about how antibiotics work, how resistance evolves, and about bacterial genetics. Large scale studies of genes and proteins combined with analysis of the evolutionary histories of genes and gene networks can help researchers identify weaknesses in the bacterial armor, ensure the target is unique to bacteria, and find targets that likely require several mutations to evolve. So where are all the new drugs? Despite all the technological advances, new antibiotics have yet to appear at a steady clip on pharmacy shelves. In contrast to many other drugs, antibiotics tend to be highly complex molecules. When antibiotic discovery peaked in the 1950s, six of the major classes were derived from natural products, while only one originated from a synthetic molecule. Since then only four new classes have emerged, three derived from natural products and one synthetic. And for each new antibiotic a resistance gene is working its way around the hospital floor, a crowded apartment building, or a high school locker room as you read. For a pharmaceutical industry bent on developing and selling blockbuster drugs, antibiotics seem to offer little in the way of financial reward. Drugs for chronic ailments—the heart, blood, or brain—are profitable. Drugs against rapidly evolving pathogens make poor nominees for cash cows. But, a recent “Perspectives” published in Science magazine, suggests that antibiotic development can be a good bet (not to mention life-saving).  “Antibiotics,” suggest the authors, “are more likely to succeed in clinical trials than other drugs.” As well, the authors write, to better conserve what we have and will have in the years to come, we might reconsider the current model of development and profit. “Separating the funding of antibiotic R&D investments,” they write, “from volume-drive drug sales,” may be one way to encourage careful use of these most precious drugs. We need new antibiotics. And, when we find them, this time around we need to treat them as the precious life-saving chemicals that they are. No one wants to return to the pre-antibiotic days. If you aren’t sure what I’m talking about, just take a walk around an old cemetery and check out the names and dates. [Blog post adapted from Unnatural Selection: How We Are Changing Life, Gene by Gene, available in October.]
antibiotic resistance
bacteria
evolution
health