Two and a half years ago, an idea for a book took shadowy form in the recesses of my mind. I envisioned tapping into the brilliant brains around me. Drawing them out of the depths of their academic morass, I would coax them into sharing their knowledge with the world. Together, we would translate their subject-area expertise into an objective, accessible, affordable primer on food and agricultural issues for the world.

Lofty ideas are great; however, the road is littered with aborted, lofty ideas. That’s because it’s gritty business doing something that breaks the mold, as most lofty ideas are wont to do. My idea was an "accessible" edited volume and it was, quite frankly, strange. It did not align with existing standards, as most edited volumes are academic and dense. This presented quite the conundrum. I vehemently did not want the jargon-filled pages and high price points inherent in academic books to block curious and impassioned individuals from pursuing an education. However, I did want the objectivity and selectiveness of an edited volume.

For the most part, we generally accept that a book is written by one person or, occasionally, a set of coauthors. There are many good reasons why the “single author” model prevails. A single author has a consistent style. A single author can craft a coherent storyline across the whole book. A single author doesn’t have to contend with competing views. As if writing a book isn’t hard enough, imagine arguing with 17 other people on how it should actually go! All of these things make the single author model easier on the editor, reader, and author. 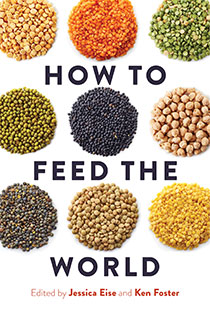 Yet there is one primary disadvantage to this standard approach. Once and a while, a sole pair of eyes simply does not offer a big enough lens through which to see the world. On an issue as enormous and mind-boggling as how to feed the world, it’s laughable to imagine that one mind might tackle it all. These are the cases in which the edited volume really rises to the fore. An editor, or set of editors in my case, will conceptualize the book and then hunt down poor, unsuspecting experts in each particular topic area to coerce into writing a particular chapter.

On the subject of global food security, it will take a concerted effort across disciplines, subject areas, skillsets, and viewpoints to overcome the extraordinarily complex and interconnected challenges we face. We acknowledged this in our book How to Feed the World by inviting leading minds in the field, each with a particular subject area, to contribute their knowledge. We were incredibly fortunate to find a publisher, Island Press, who believed in what we were trying to do: making contextualized, scientific information accessible in today’s veritable quagmire of flashy soundbites based on opinion, snippets, and occasionally smoke and mirrors. Even though it didn’t fit the mold of a traditional genre, they took a risk on us anyway.

After two-and-a-half years of steady work, we crossed the finish line and what might have been but a fleeting moment of wishful thinking became a "flesh and blood" book, if I may use such a description. Two editors, 17 contributors, one publishing house, and endless conversations and countless hours later, we are honored to share our work, How To Feed the World, with you.

It is our hope that in drawing on such a breadth of expertise, and striving to make the chapters accessible, we now share with you a collection that provides a wide-ranging look at the modern food system. We provide a solid grounding in key issues; however, we also do something more. We ultimately challenge you to investigate further and, yes, contribute to the paramount effort to feed the world. Everyone has something to offer, and after reading our book, we ask you to consider how one of your lofty ideas may change the world. To progress, we need everyone’s energy, and although it will take long, hard work, I would say that this is one of the most worthwhile goals for which we may ever fight.

Jessica Eise is an author and communications researcher at Purdue University’s Brian Lamb School of Communication.