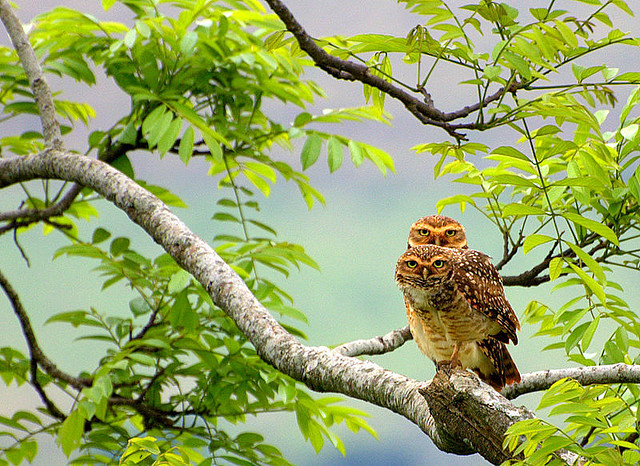 By 2080, the burrowing owl (Athene cunicularia) could lose 77% of its breeding range. Photo by Dario Sanches, used under Creative Commons licensing.
Reposted from Biohabitats' Leaf Litter with permission Earth’s climate has always been changing, and living things have always needed to adapt to changing environments in order to survive and reproduce. For many species, this has meant movement. But for species on the move due to modern climate change, travel is not what it used to be. First, there are the routes. By altering the landscape in the name of development, agriculture, and infrastructure, we humans have not made it easy for any kind of species migration, let alone those we cannot yet anticipate. 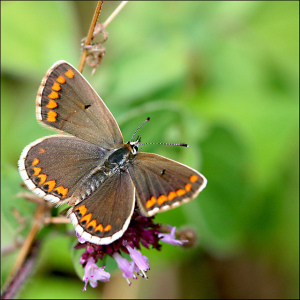 Brown Argus butterfly (Aricia agestis). Photo by Phil, used under Creative Commons licensing.
Then, there is the pace of climate change. Stanford climate scientists warn that the rate of change over the next century will likely be at least 10 times quicker than any climate shift in the past 65 million years. A 2011 study showed that species movement in response to climate change is happening two to three times faster than previously estimated, but is that fast enough? Can species keep pace? Last year’s news about the Brown Argus butterfly, the first known species to lose its ability to do something essential (eat and lay eggs on one of the two plants it has needed for survival) as it moves in response to climate change, raises doubts. So does Audubon’s recently released Birds and Climate Change Report, which projects that in merely 66 years, half of North American bird species will have lost 50% of their climatic range. What do we know about current and projected climate-driven species movement? Can this information inform our work in ecological restoration, conservation planning and regenerative design so that we can facilitate species movement as the climate changes? What about the movement of invasive species in response to climate change? Learn more in the Leaf Litter newsletter, which includes interviews with Josh Lawler and Miguel Bastos Araújo about their work on climate-driven species movement.
biodiversity
climate
climate change
science
wildlife