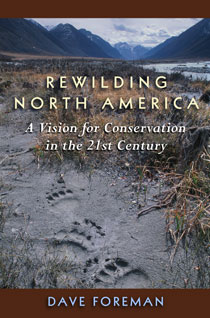 A Vision For Conservation In The 21St Century

In Rewilding North America, Dave Foreman takes on arguably the biggest ecological threat of our time: the global extinction crisis. He not only explains the problem in clear and powerful terms, but also offers a bold, hopeful, scientifically credible, and practically achievable solution.

Foreman begins by setting out the specific evidence that a mass extinction is happening and analyzes how humans are causing it. Adapting Aldo Leopold's idea of ecological wounds, he details human impacts on species survival in seven categories, including direct killing, habitat loss and fragmentation, exotic species, and climate change. Foreman describes recent discoveries in conservation biology that call for wildlands networks instead of isolated protected areas, and, reviewing the history of protected areas, shows how wildlands networks are a logical next step for the conservation movement. The final section describes specific approaches for designing such networks (based on the work of the Wildlands Project, an organization Foreman helped to found) and offers concrete and workable reforms for establishing them. The author closes with an inspiring and empowering call to action for scientists and activists alike.

Rewilding North America offers both a vision and a strategy for reconnecting, restoring, and rewilding the North American continent, and is an essential guidebook for anyone concerned with the future of life on earth.

"Foreman somehow manages to be comprehensive, historically informed, accurate, and succinct. This makes the book surprisingly well suited to serve as a text for introductory courses in ecology or conservation biology. The book's provocative vision will certainly spark interest and lively discussion."
Conservation Biology

For More Information
Notes
Index
About the Author

Earlier this week, visionary conservationist and Wildlands Network cofounder Dave Foreman passed away. The author of numerous books including Confessions of an Eco-Warrior and Rewilding North America, Foreman’s ideologies were—and continue to be—the very core of our mission. His vision for continental-scale rewilding inspires us and many other wilderness and biodiversity protection and restoration efforts around the world.

Dave had a profound influence on the lives and careers of our staff, board and others from the Wildlands Network community. We’re gathering an ongoing compilation of stories and memories of Dave, below. If you would like to contribute, please reach out to danielle@wildlandsnetwork.org.

“I am saddened to learn of Dave Foreman’s passing, even though I met him only once or twice. His writings in Wild Earth were a ray of light for me during my early career many years ago. I was inspired then (and still am) by his understanding that there are wild beings with whom we share our planet, who would be just as happy to never learn of our civilizations and cultures, and that they have an inherent right to go about their business without us modifying their landscape, altering the sky above them, soiling the water they drink and filling them with microplastics and other horrible byproducts of our ignorance and arrogance. I know he was devoted to such wildeors as he called them, embracing an ancient word that fitted them better than any newer term. That devotion attracted me to Wildlands Network many years ago. May his proverbial campfire shed light on many future generations so that we may learn one day to respect all beings as they deserve. Compost in peace, Dave.”

“Dave’s presence and vision set a high bar for my expectations of conservationists at the start of my career. He was the first eco-warrior I’d met in person, in the early 1990s, through my work with a philanthropy. His embodiment of his beliefs—to protect those without voices, and the right of all beings to exist—resonated with my worldview, and has deeply influenced me personally and professionally. Little did I know during those memorable times with him in early planning meetings for the Eastern Wildway that I would find myself working with Wildlands again in this chapter of my career. With his passing, I will act on his primary exhortation to me: That in order to protect the wild, we must spend time in the wilderness with our coinhabitants. Rest in peace, Dave, and thank you. See you in the wild.”

“Dave touched so many people, and I was certainly one of them. I can honestly say that I would not have had the same career in conservation without Dave. I met him first on in the pages of The Big Outside and could not have been more thrilled to finally meet him in person as a fellow Sierra Club board member. We shared red wine, a trip down the Colorado River, and late nights talks after long board meetings. He always inspired me to think big, and I was honored when he invited me to join the board of what was then the Wildlands Project. His vision will continue to inspire me, as will the thrilling memory of his wolf howls that called us to action. RIP Dave.”

“I first heard of Dave Foreman when he came to the University of Wisconsin-Madison (where I was a young graduate student). He gave a fiery speech about the Wildlands Project and his vision for robust North American conservation. That speech ended with Dave giving his best wolf howl, and the entire auditorium filled with hundreds of people joined in; it was a beautiful chorus. That talk must have planted a wild seed inside my head, as it wasn't long before I was reading Wild Earth magazine in the university library and thinking ambitiously about restoring wolves and other wildlife to the USA.

“Roughly a decade later I had the chance to come work for Wildlands Network, and I've been chasing Dave's dream ever since. I did get to meet him in person a couple of times during my time at Wildlands Network. He was such a cool guy with so many experiences to share from his adventures and from his advocacy. I always assumed I'd eventually get the chance to join him on a river trip somewhere wild and remote, to haggle over the campfire over how to protect the cores and corridors that needed to be protected. While I seem to have missed the last boat on that opportunity, I know I'll carry on trying to implement Dave's vision of a wild and free North America. I'll also lift my voice to join the chorus of wolf howls that must be haunting the night air across the world right now, as people realize what a leader we've just lost.”

“I encountered Dave shortly after arriving, in 2001, at what was then the Wildlands Project. Anyone who met Dave knows he was a force of nature—in more than one sense. I will readily admit that his passionate, uncompromising advocacy for the natural world in its most fundamental and primeval forms was, shall we say, uncomfortable at times, particularly in the context of conservation then happening in the northeastern U.S. and southeastern Canada. Yet his vision—of healing a world of wounds, of valuing wild nature in its own right—stuck with me and, as it turns out, is a lodestar for millions across the world.

“I’m not sure if Dave coined the term rewilding, but he certainly had a hand in popularizing it. An idea that seemed obscure those many years ago is now used freely and frequently in places as far-flung as the UK, Australia, South America, Asia, and the Middle East. A few days ago, my mother-in-law sent me an article from The Guardian about rewilding a river in the Netherlands; just this month, the New York Times reported on efforts to restore cheetahs to India; in April, a glossy travel magazine featured the headline, ‘Scotland is Poised to Become the World’s First “Rewilding Nation.”’ This is Dave’s legacy. We have lots more to do, but I’ve got to hope that he’s smiling and happy with all he accomplished.”

Read Dave's chapter, Where Man Is a Visitor, in the anthology, Place of the Wild below or download it here.